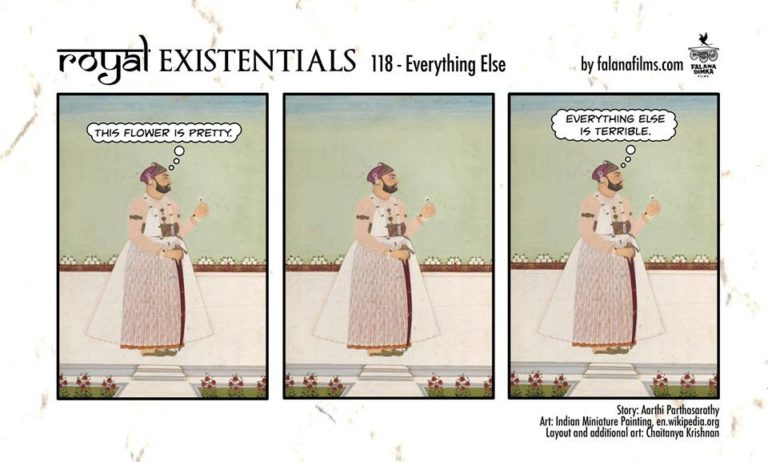 As another election looms in our collective future, the air is electric with political conversations. On one hand, we see the pseudo-intellectuals ranting about their ideologies, on the other hand, we see the not-so-well veiled attempts of politicians trying to maintain their footing amongst their vote banks. As always, caught amidst the extremes, is the common man, trying to make up his/her mind about whom to cast their vote for.

In such a crucial time, it is essential to understand the realities of the political and social discourse. And for those who aren’t attuned to them through articles and talk shows, comics are the ideal entry point.

The following are some of the best Indian web comics to follow in order to stay updated and to find the funny in the socio-political stories around you.

George Mathen who goes by the name Appupen has created intricate storylines featuring his comic book superhero Rashtraman, as well as Sri Cowboy, Sri Propagandhi and others, drawing from the current political scenario, and calling out reality as it is.

Mathen is also one of the brains behind the page braindedindia that features his works, as well as works from other political and social satire web comics from India.

Click here to watch our video interview with Appupen.

With a style that looks deceivingly simple, such as line drawings and thought bubbles, Sanitary Panels talks about anything and everything relevant in current times – from period pain, freedom of choice and of course, politics. Through her satirical doodles and comics, Rachita Taneja draws attention to issues in the nation that mainstream media often fails to notice.

The impact of our lives on the flora and fauna are always taught in schools and discussed in articles, but not enough in daily conversations. Artist Rohan Chakravarty, the creator of Green Humour has managed to bring the stories of wildlife to our everyday life, through his humorous portrayals. He also talks about how human conflict affects the nature and animal world around us.

Kruttika Susarla, the artist better known for her series of feministic web comic series about women’s issues, has recently started creating the comic – Politiricks. While they are not funny in an obvious way, the comics are well thought out and portray an accurate satirical take on the current political scenario.

Click here to read our profile on Kruttika’s 36 Days Of Feminist Type project.

For the last five years, Royal Existentials have drawn inspiration from contemporary conversations around wealth gap, feminism, class difference and illustrates the similarity of the current scenario to the monarchic, class based system from historic times. The web comic by Falana Dimka Films uses Indian vintage art and images to pass the humorous social comments. While this page does not upload weekly web comics as they did in the beginning, and comes out with a few comics once in a while, the page still contains some satirical gold.

In addition to the above mentioned web comics, there are many artists like Tatkal Ticket, Crocodile in water, tiger on land (click here to read our feature) and more. If we’ve missed out on your favourite Indian webcomic, let us know in the comments below!