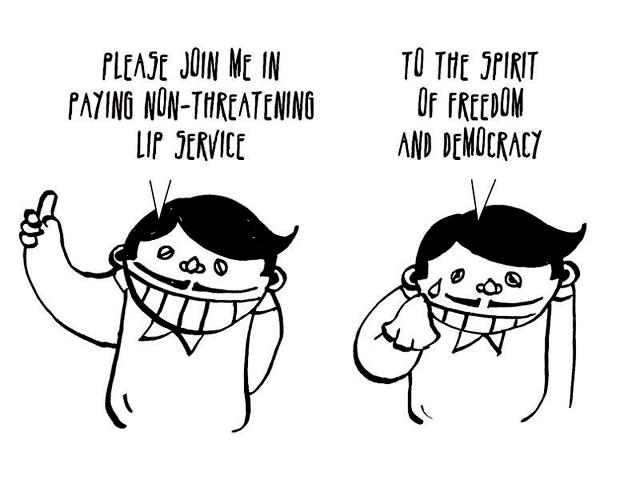 “Monday mornings are the best time of the week for insults”

You can’t go wrong with a slogan like that.

‘Crocodile in Water, Tiger on Land‘ is a popular black and white comic strip illustrating satirical takes on societal and political issues in India, and sometimes the world. Published anonymously every Monday since 2010, it is named after a popular Bengali saying – “Joley Koomir, Dangay Bagh”- meaning stuck in between two predators, with nowhere to run and nowhere to hide.

The creators choose to be anonymous, even after HarperCollins Publishers India published an edited selection of the comic between 2010 and 2014 in book form by the same name. But after scouring information from old interviews online, we have discovered that they are a writer-illustrator duo based in Kolkata, who like to observe and plan during weekdays, do the actual work on weekends, and publish on Mondays, like clockwork.

The comic strip takes pot-shots, hurls subtle insults, and takes – in the creators’ own words – “below-the-belt cheap shots in comic form” at the world around us, inspiring, frustrating and provoking their followers across Tumblr, Facebook and Twitter along the way.

They accomplish this through a motley crew of characters, nameless archetypes, who represent the different sections of our society, such as a grumpy old man, an aunty-ji, the creators themselves, even a dog, and men with distinct hairstyles (whose identities are a bit of a guessing game; the answers, though sometimes unexpected, eventually come to light). Abstract inanimate objects also show up sometimes, like the TV, to represent the media.

True, their work drips in satire, but the CWTL creators have a unique personal sense of humour too. Case in point – they highlighted negative feedback on the back of their own book, instead of rave reviews, exclaiming “What we like is that even our abusers have a sense of humour” Such is their artistic disposition!