To better understand the place nudity holds in photography and self-expression, we spoke to Mannat Atwal, a self- taught photographer who has undertaken the challenge of normalizing nudity in photography and through his work, starting conversations around mental health.

It started as a noble endeavour – to alter the perception amongst Indians that nudity is vulgar and pornographic. But soon Mannat realized that he could use this form of photography to express his own struggles with mental illness. Using the human body as a conduit, he began sharing his own story with the world.

Mannat feels that despite the number of Indians suffering from mental health disorders being on the rise, they are still largely invisible to society. Stigmatized and shamed, people suffering from these disorders are seldom given a space to express their pain. As a result, most of his work deals with this widespread repression of mental anguish and one’s inner struggles.

In order to do justice to such sensitive concepts, he picks models who can relate with the idea behind them. He feels that working together becomes much easier that way. Mannat tries his best to help his models relax, and encourages them to be themselves. “If I view my models with lust, it will translate into my work. Then I can’t get people to change their perspectives.” he says.

It is only recently that he has actively shared his work on social media channels. “I mostly send my work to international publications since they have a more nuanced understanding of nude photography. But I have started posting my work on my Instagram profile now because this is how I can change the perspective of people around me.”

However, like every artist trying to gain visibility on Instagram, Mannat too finds the platform’s dogmatic censorship guidelines annoying and limiting. “For some concepts, it is vital to show the human body in its entirety. But if I have to censor my work for Instagram, I feel like I’m not being fair to my own work so I end up not posting these works on my feed” he points out.

Art series- Inner Rage In the time of stillness Only the days passed by, But nothing changed Only the bitterness grew, the anger, anxiety, getting eaten from the inside.. Days became months and months bacame years Nothing changed Only the days passed by All what is left now is the shell with no soul in it. . With -@gilesdsouza1 . . . . . . #aovportraits #thedarkproject#culturexdead #innerjourney #selfdestruction #selfharm #depression #mentalpain #anxiety #ourjourney #artistsoninstagram #wasit #evenworthit #wecould #havelived#photooftheday #portrait_society #art_empire #artistsoninstagram #artofsplendor #bravogreatphoto #pr0ject_soul #pr0ject_bw

On realising that he hadn’t yet worked with male models, Mannat recently organized a nude photoshoot with a male model. Through this series he wants people to accept their flawed traits. He feels that rather than accepting their dark side, people always push themselves to portray a picture of perfection. This often takes a toll on their mental well-being. He believes that people should embrace their shortcomings as they accept their more socially acceptable traits. 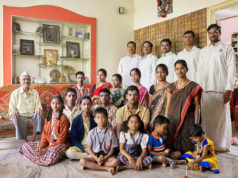