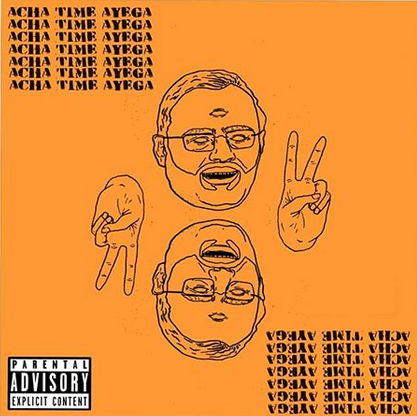 “The principles of true art is not to portray, but to evoke” – Jerzy Kosinski

Art is inseparable from social reality. The objective of art is not just to soothe the soul but also to set it on fire. Armed with humour, irony and a treasure trove of talent, artists highlight flaws in the ruling powers, societal issues and unfair policies. It empowers the general public to critically view the world around them and to voice their opinions on matters that affect them.

In India, artists like Abhilash Baddha are constantly battling the powers that be in order to ensure the survival of a healthy democracy.

1. A lot of your work deals with subversive art. How were you introduced to the concept?

I think the first time I got a taste of subversive art was via single panel comics from newspapers, sociopolitical Hindi poems/writings and propaganda posters. As a child it really appealed to me and I think down the line when I started drawing professionally, I subconsciously went into making stuff on the same lines.

Also, I guess a lot of my thought process developed by reading and by listening to a lot of socially charged music as a kid. Now when I look back to things that I’ve been taught, I keep questioning them.

2. What inspires your subject matter?

It’s usually a lot of absent mindedness, thinking about something in thin air, or a thought that crosses my mind that I note down to work on later. Sometimes, it’s the play of words. A few other times, it’s been a piece of news that I’ve read.

I never confine myself to a single medium or tone to express what I feel. It varies with the idea in hand.

3. Could you name a few of your artist inspirations?

Pejac, Orijit Sen, Timothy Goodman, Marina Abramovic, Ai Weiwei, Priyesh Trivedi, Guerilla Girls, Matt Blease, Daku among others. Though I might not follow them in my art style or medium, they have definitely pushed me to present my art in it’s true form, no matter what.

4. A lot of your your work is politically charged satire. Do you think art has the power to bring about change in society?

I see it as a medium just like journalism and an art piece made from enough research and gravity can make a really great impact.

If not that, at least it starts a dialogue. And if your artwork is able to do that, then it has solved its purpose. My view may not be an universal view but at least it gets people talking.

VR the people. The digital propaganda is not a far fetched future. It's here. Swaying masses with every fabricated post and advertisements that don't even feel like an advertisement anymore. The endless campaigns , the endless WhatsApp forwards, the posts shouting "10 great things our beloved great leader did for us" to cover up 100 sins. VIRTUAL promises don't promise better REALITIES Nav bhavishya // Nou Future #ossomagazine #dyscoapp

5. What are some of your favourite pieces from your body of work? The inspiration and thought process behind them?

I really like ‘VR the people’ , ‘Monumental shadow’ and ‘Love and Evolve’. With ‘VR the people’, I had in mind the digital propaganda that is being run by political parties to brainwash a young mass of people. I was also thinking of hopeful households who innocently tend to give in to fake news and propagandist messages on social media.

‘Monumental shadow’ again pleads with people to question the government on how they are answering to the needs of the hour. It has an underlying message of no matter how much money you put into the grandeur and the size of the statue,  it is only casting a bigger shadow on the current needs of people of India. It’s just the equivalent of sweeping the problems under a carpet by trying to boast about a big statue.

Check out more of Abhilash’s work on Instagram and Behance.