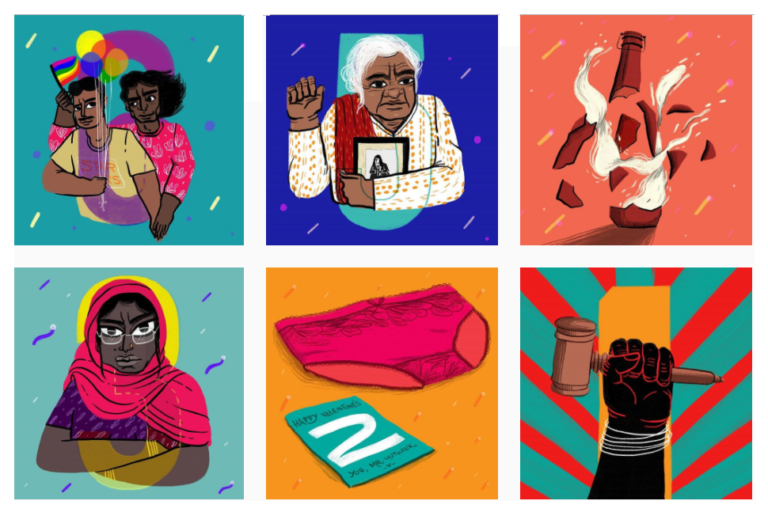 Kruttika Susarla, an illustrator and graphic designer from Delhi, is making waves for her Instagram illustration series showcasing organizations, campaigns and personalities who have driven feminism in India.

Susarla, who last year, designed the interiors of an auto with celebrated female leaders in India such as Irom Sharmila, Savitribai Phule and Soni Sori for Mumbai-based art initiative Taxi Fabric, was inspired this year to use 36 Days of Type for a similar purpose. (Read more about Taxi Fabric here).

The series is part of 36 Days of Type, which is an annual open call project, in which designers and artists interprets letterforms in an inventive style. Kruttika was inspired to create an educative A-Z that highlights significant organizations, individuals and gender equality movements, which kindled conversation, triggered debate and influenced society.

I for Intersectionality | Intersectionality is a very relevant trait of feminism, (especially for India)—where one cannot think of fighting for equal rights without understanding that there is a prevalent overlap of social identities like caste, class(economic and social), gender, ethnicity, religion and disability. A discourse that does not take these into consideration is simply not a feminist one. I for 36 days of Feminist type for this year's edition of @36daysoftype. Because it's 2017 and feminism is not a marketing tool to sell your new nude-shade lipstick. #36daysoftype #36daysoftype04 #36days_i . . . #illustration #illustree #picame #pirategraphic #graphicdesigncentral @thedesigntip #art #artprints #graphicart #designspiration #creativecloud #magicgallery #dailysketch #supplyanddesign #theartshed #artsanity #artfido #illustrator #designsheriff #bodypositive #womensrights #feminism #intersectional #caste #religion #36daysoffeministtype

In an interview with HuffPost India, Susarla says “I sought to keep this within the realm of Indian feminism because the issues surrounding women and minorities here are so complex—it’s mixed with religion, caste, sexuality and majority of public discourse is devoid of these intersectional realities.”

The illustrator confesses to being nervous before creating the series, and so in preparation, read extensively, including ‘Seeing Like a Feminist’, ‘Recovering Subversion’, articles on Kafila, Crosscurrents, Raiot, etc.

The series, which begins with ‘A for Androgyny’ and ends with ‘Z for Zeal’ manages to spotlight the Pink Chaddi campaign, Satyarani Chada’s anti-dowry movement, Kali (the first feminist publishing house) as well as Savitribai Phule’s first women’s school in Pune and more in between.

T for Theory | Feminist theory is directly responsible for the creation of some of our best activists, leaders and sociologists. It is the theoretical and philosophical part of feminism that scrutinises social structures, gender roles and inequality and in a broader sense looks at our world through a feminist lens. Mahasweta Devi, Zubaan books/Urvashi Butalia, Gayatri Spivak, Nivedita Menon(who, if I may divert a little, to say that I'm an absolute fangirl of and has been an absolute influence + inspiration), to name a very few are some of the noted Indian feminist writers. T for 36 days of Feminist type for this year's edition of @36daysoftype. Because it's 2017 and we don't need Chetan Bhagat to mansplain feminism. #36daysoftype #36daysoftype04 #36days_t . . . #illustration #illustree #picame #pirategraphic #graphicdesigncentral #art #artprints #graphicart #designspiration #creativecloud #magicgallery #dailysketch #supplyanddesign #theartshed #artsanity #artfido #illustrator #designsheriff #india #womensrights #feminism #niveditamenon #theory #feminist #activism #36daysoffeministtype

Susarla takes particular care to represent individuals with different skin colours, body shapes, face structures and features. “There is an urgency to have this conversation, especially with violence against women and minorities increasing every day and through this project I found the channel,” she explains in the same interview.

Check out the series on Instagram and for more of Susarla’s work, visit her site.