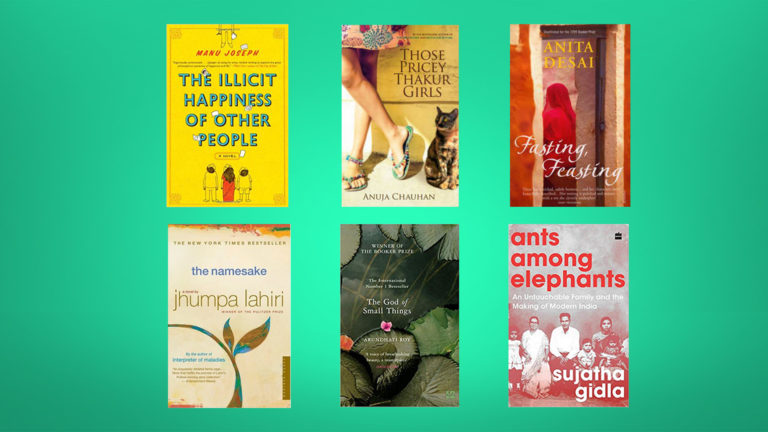 It is a truth often acknowledged that the family is the heart of Indian society. It defines your identity, influences the lifestyle you will follow, and impacts your decisions on everything from choice of career to partner.

The ties of loyalty and belonging it affords, as well as the complications and drama it engenders, has inspired writers time and again to dive into the ambiguities of Indian family dynamics.

The Namesake by Jhumpa Lahiri

The Namesake follows the Ganguli family from their tradition-bound life in Calcutta to the suburbs of America where they find friends and family in others who came to the country like them, with hopes of a better life.

Lahiri fulfils all the benchmarks of a family drama in this book: rebellious children, marriage, divorce, the struggles of uprooting a family, and letters with baby names getting lost in the mail.

The book examines the interactions between two generations – one that holds fast to the traditions of the homeland, and the other, incorporating the attitudes of their new home. And as a result, it interrogates whether an Indian family is only an Indian family because of geography.

Ants Among Elephants: An Untouchable Family and the Making of Modern India by Sujatha Gidla

In Ants Among Elephants, Gidla takes us into her vulnerable, close-knit Dalit family as they desperately strive for a life of equality and dignity.

The story revolves around her maternal uncle, KG Satyamurthy, who was brutally rejected by an upper class girl because she was a Brahmin and he was not. It also tells the story of her mother Manjula, who was given a poor grade because her professor realized she was a Dalit. It is these hardships that made Gidla write the story of her life.

At the core of this book, is a family that stays together and fights their way through a life of discrimination and pain by leaning on each other.

In Fasting, Feasting, best-selling novelist Anita Desai shifts focus between a close-knit conservative Indian home and a not-so-different American household. Revolving around the life of Uma, an unmarried forty-year-old who is starved of a life and Arun, the privileged son, who finds himself in an alien land, Desai vividly captures the whirlwind of family dynamics threatened by the effects of a strict patriarchal family on the younger generation.

Desai’s account of a family is harsh but honest with many flawed individuals. In a tone that is at once quiet and loud, she talks about how familial ties are demanding, so much so that the desires of the individuals are in constant tension with that of the family.

The God of Small Things by Arundhati Roy

Roy’s debut novel, The God of Small Things, is a family saga about the Ayemenem household who live in a little town in Kerala. Through the life of a pair of fraternal twins, Estha and Rahel, Roy narrates the internal strife of the family and its impact on individual members. Unapologetic in its depiction, the book brings out how, regardless of whether they care about each other or not, members of a family are obliged to stick together in times of adversity.

Blending the complexities of this family life with larger issues of caste and politics, Roy packs the Ayemenem household with sinister secrets and prejudices, making it an enthralling read.

The Palace of Illusions by Chitra Banerjee Divakaruni

The Mahabharata is at its core, a narrative about the fateful war between a group of cousins, the Kauravas and the Pandavas. Overlooked in this chaos were the women in the family. In The Palace of Illusions, Chitra Banerjee Divakaruni narrates this very story, but through the eyes of Draupadi, the fierce wife to the Pandavas, and daughter to Drupad.

Here is a woman who stands up to her patriarchal family, takes control of the household from her mother-in-law, and becomes a fiery female voice in a world of warriors, gods and kings.

An attempt at transforming an old icon into a contemporary one, this novel is both rich and timeless, packed with complicated relationships, in which Draupadi is the cohesive that keeps her family from falling apart.

The Illicit Happiness of Other People by Manu Joseph

This is a story about family loss and rediscovery. It unfolds through the lives of Mariamma and her alcoholic husband, Ousep Chacko, who set out on a journey to find the cause of their son’s death.

The tragedy helps them make sense of their dysfunctional family, and in a way negotiate repressed feelings, and understand grief.

The Inheritance of Loss by Kiran Desai

Desai in his novel, The Inheritance of Loss, explores how strife and internal conflict, aided by historical forces, affect a family’s sense of belongingness and how, over generations, that fear and uneasiness is passed down as a loss.

Desai’s characters are colourful. There’s Jemubhai Patel, the grandfather, his hardworking son, Biju, who has multiple miserable jobs, and Sai, his sixteen year old orphaned granddaughter. The age gap and differences in social identities helps to explore the relationship that Sai has with her grandfather, and the relationship her father shares with his own father.

At once fierce and tender, the novel addresses a variety of issues including multiculturalism and economic inequality and the experiences of those whom the immigrant leaves behind: their family.

A Suitable Boy by Vikram Seth

Bestselling novelist Vikram Seth’s A Suitable Boy is coloured by a desire to explore the love, humour, reconciliation and prejudices in a multi-ethnic society. The book does so through the story of four families: the Mehras, the Kapoors, the Khans and the Chatterjis, in a post-independence India.

Arranged marriages, an inevitable part of Indian life, drives the story. Lata Mehra is forced to choose between the young Muslim man she loves or the suitable boy that her family finds for her. Her mother is a stern force and Lata fears defying her. As for the Kapoor household, tensions arises after the youngest son, Maan Kapoor, falls in love with an infamous prostitute.

Despite its length and the complexity of interwoven family networks, in the end this is a story about the human instinct of turning to family for care and strength.

In the bestselling novel Mrs.Funnybones, celebrity wife and mother Twinkle Khanna captures the life of the modern Indian family woman who goes to work, runs a home, confounds the mother-in-law, whips up meals, and has a baby to add to the madness of it all!

With a breezy tone and simple language, Khanna doesn’t spare even her family when recounting humorous encounters about her mother-in-law, children and husband. In the end, this book is a peek into the contemporary Indian family life.

Queen of Indian chick lit, Anuja Chauhan, in her best-selling novel Those Pricey Thakur Girls, narrates the story of Justice Laxminarayan, his wife and their five daughters who are named alphabetically: Anjini, married but a flirt nevertheless; Binodini, a mother resolute on securing her children’s future; Chandrakanta who elopes with a foreigner on the eve of her wedding; Eshwari, the ‘knower’ of all boy tactics and Debjani, defender of all the mongrels on Hailey Road!

The book offers insight into everyday characters who are dismissed as ‘fussy housewives’ and ‘nosy journalists’. Chauhan interweaves serious issues of politics and media with the light hearted interactions of a family.

Do you have a book in find that should be on this list? Let us know in the comments below!