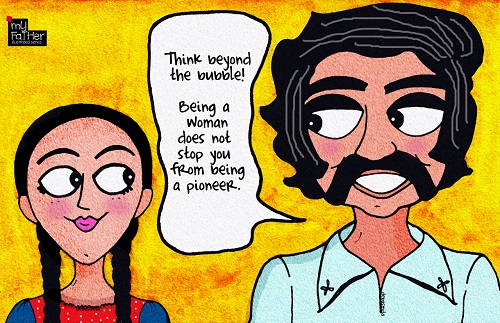 It all started with a TED talk.

Debasmita Dasgupta listened as Shabana Basij, an Afghani woman, narrated her experience about growing up during the Taliban regime, at a time when girls were forbidden from entering schools. She listened intently as Basij explained how it was her father who helped fight for her education, telling his daughter “People can take away everything from you except your knowledge.”

Dasgupta was inspired by Basij’s story who has a close relationship with her father as well. She wanted to collect more positive stories that illustrated the special bond shared by fathers and daughters.

“Through this project, I want to encourage fathers to fight for the rights of their daughters”, she says. Every story portrays how a father protects the rights of his daughter and inspires her to become a good person and do better for everyone.”

After curating a multitude of inspirational father-daughter stories from all over the world, from the likes of Frieda Kahlo to Dipa Karmakar, Dasgupta features them online and dedicates an illustration to the duo.

One of the most notable in her ‘My Father’ illustration series is one of Monica Singh (an acid attack survivor) whose father told her that her inner beauty is not something that can be taken away. It is set against an illustration of the two of them in which Monica’s scars are covered by flowers.

Her effort to celebrate fathers that have pushed their daughters to strive for greatness and that have supported them through every step of their struggle is a laudable one, also because it highlights the efforts of men in the fight for gender equality. And if Dasgupta has her way, her series will continue to do so.

“My goal is to achieve 500 illustrations in next two years, reaching out to many more individuals and communities”, she says. “Every story is special and needs to be told.”

Follow the ‘My Father’ series here and for more of Dasgupta’s artwork, head to her site or Instagram.