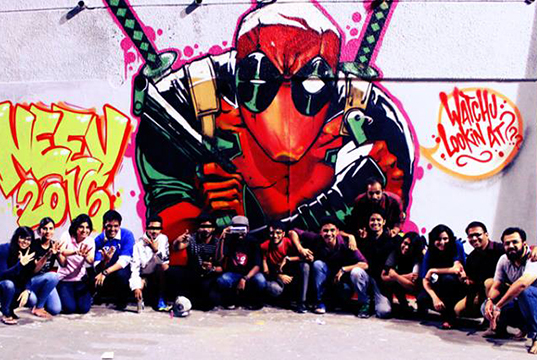 When a blank wall becomes the canvas of an artist, there can be numerous stories to tell. Whether meant to inspire or just to entertain, graffiti can change your perception towards a locality or a building. However, street art in India still has a long way to go considering Indians have yet to learn to appreciate the beauty of this unconventional means of creative expression.

In such a scenario, an enterprise called Wicked Broz is trying to change Indian perception towards graffitis and street artists. They currently represent some of the most talented graffiti artists of the nation such as Zake, NME and Mooz. We recently had the chance to speak with the co-founder of Wicked Broz, Zain Siddiqui to understand the company better. Here’s what he had to say.

1) Why street art? And what inspired the starting up of the collective?

Growing up I used to sketch and at one point even considered going professional. But what stopped me was the fear of the unknown and the disappointment to my family if I failed. This is the story of many potential artists in India who are faced with a shortage of opportunities and lack of support when it comes to taking up art as a career. Art, especially visual art is seen as a waste of time.

My partner Omkar and I shared the same vision to use our talents to promote artists. To motivate people to join the underground revolution taking place in India. To tell everyone that nothing is a waste of time. Being wicked once in a while is fine. “Shaitani bina, bachpan bekar hai! Nahi?” (Isn’t childhood vain without pranks and mischiefs?)

One of the first people we met in our journey was Zake, India’s rising graffiti star. It didn’t take long before we realised that street art and graffiti offered us the opportunity to spread our message far and wide. Ever since then, we have been injecting art into everything. Changing the world – one wall at a time has become our mission.

2) All of the pieces by the artists are gripping, but one piece in particular, ‘Wings Of Hope’ caught our eye. Can you tell us a little more about what inspired it?

Ah! That one. At Wicked Broz, we are proud of projects like these where our team contributes to social causes.

NME has lived all his life in Mumbai. He has worked with Slumgods and various other initiatives in Dharavi. It is here that he was introduced to Hip Hop. He learned to do graffiti and found his love for skateboarding as well. He is an embodiment of the hope that Hip Hop brings to lives of kids from poorer backgrounds.

His work in Dharavi even caught the eye of Ulrike Reinhard. She is the founder of Janwaar Castle, a little school run in Panna district in Madhya Pradesh to empower the lives of tribal kids. NME and his friend Shruti spent a week at her school and interacted with the kids. NME immediately could instantly connect with them because of what he had seen in Dharavi and felt that they needed a visible symbol of hope in their lives. That’s the background to Wings of Hope. A simple yet powerful piece.

(Learn about another artist who illustrates nature in a unique manner by clicking here).

3) Many places in India condemn graffiti as vandalism. How do you obtain permission to paint on walls in these instances?

Finding a public wall that will grab eyeballs is not the challenge. Our challenge is always to find walls which belong to open-minded communities and agencies.

In India, public art draws a lot of mixed reactions. In some parts, it is looked at with skepticism while in other places people appreciate it. Many people think that we will just vandalize their wall. Some think that we are painting signboards. There are others who have supported our cause and have even offered us snacks and drinks.

We recently worked with a waste management NGO called Waste Warriors to create huge murals in Ambala and Dharamshala. We also completed a massive wall in Navi Mumbai thanks to a helpful government agency working on Swacch Bharat mission. The tide is changing, slowly but surely.

4) What is the riskiest thing you’ve ever done in the course of executing your project? And why were you willing to take that risk?

Riskiest thing…hmm. Tough one. There are many but I think the riskiest one I cannot even mention. Haha. It could land us in trouble.

However, I can tell you about the one time we thought it was cool to paint a railway engine in the middle of the night. We were kids running around having fun. We forgot that painting on government property is a punishable offence. We were totally scared when we realised what we had done and what will happen if people find out about it the next day.

But thankfully, we were lucky and nothing happened. A year later, we discovered strangers sharing pictures on social media of that painted railway engine still running in Kurla and we all had a good laugh.

Graffiti actually started out like this. With kids running around in New York suburbs painting their names on public walls while no one watched. The adrenaline to do a dare. The thrill to watch your pseudo name being seen by thousands and no one realising who you really are.

That’s what still inspires generations of graffiti artists before they move onto more challenging pieces. The opportunity to paint next to a train track in Bandra or hanging off a ledge on bridges light up the eyes of many. The bigger and daring the piece is, the bigger your bragging rights will be in the community.

5) What do you see as the role of the artist in society?

First and foremost we must realise that every good artist is inherently a selfish person. He paints for his own satisfaction and tries to become a perfectionist by achieving the closest possible rendition of his own vision. As such he should not be burdened to play a role in society.

It just happens that sometimes the artist is obliged by this very vision to paint publicly keeping in mind the reaction of people around him. It could be a commissioned project. It could be a public art project for a municipality. Whatever, the case maybe, the very existence of an artist in a community is a boon for the people around.

Not only can he/she create an impact with the beautiful art but can also inspire others to see reality from a different angle. Only an artist can push the envelope of society’s imagination. If an artist can take up this challenge and succeed in effecting the life of every person, he should consider himself successful, since that is all it takes to change the world each day.

6) What do people first think of, or feel, when they see one of your works on the street?

I honestly don’t know. Each person has his own reaction. It also depends a lot on what the art is all about. Most of the time we try to create happy, hopeful pieces. Sometimes we deliberately try scaring and invoking fear in hope of making people rethink the norms.

7) What are your creative plans/plans for cool murals in the future?

We haven’t even fulfilled 1% of our dreams. Everything we are doing right now is a dream project in one way or the other.

We want the nascent stage of Indian graffiti to fly higher. We hope to do more tall buildings, more community engagement projects and organise graffiti jams and festivals. Maybe paint an airplane while we are at it? With permissions of course :p

In order to encourage street art, Wicked Broz conducts regular workshops as well. You can learn more about them through their website or get in touch via Instagram and Facebook. Let us know which of their murals is your favourite one in the comment section below.