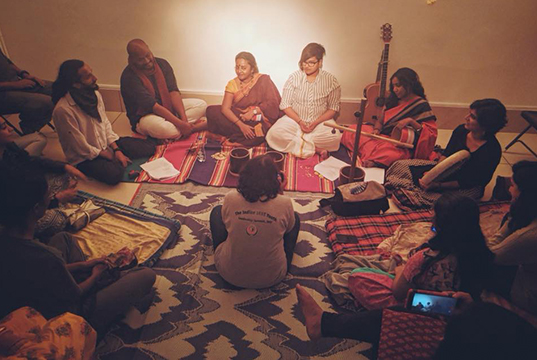 “Why are our kids taught to sing ‘Rain, rain, go away’ when India is a rain-dependent agricultural country and most of our folk songs are actually prayers for good rains?”, asks Shilpa Mudbi Kothakota. It’s this insight into the role of folk traditions as both cultural heritage and living culture, that led her to launch the Urban Folk Project, an intriguing initiative to archive folk art forms in Karnataka.

Shilpa is a documentary film maker from Bangalore, but with strong ties with her family in Mudbi, a remote village in northernmost Karnataka. She travelled extensively across rural North Karnataka for work, and in the process, nurtured a growing interest in the state’s folk art forms.

What piqued her interest?

Yellammana Jogamma #jogamma is a woman who has been willing or unwillingly, and many a time unknowingly made a ‘daasi’ (servant) of the #deity #yellamma. Thousands of Jogathis/Devdasis across Maharashtra, Karnataka and Andhra Pradesh chant, sing, and tell tales of Yellamma for a living. These women have carried several musical traditions over the centuries. However divine their music they and their #musicalinstruments are thought of as #untouchable by the general populace. Hence #dyingtraditions #dyinginstrument #endangered #devadasi #banned practice.

“Folk is not just songs and dances but the entire gamut of knowledge that is handed from one generation to another, and evolves every time it exchanges hands, or minds”, she points out. “Therefore, it’s not transferable as it is not a form, but a way of life.”  Each form of folk therefore is a unique glimpse and taste into a way of life, rituals and traditions.

Consequently, she began collecting and archiving lesser known for tales, which are centuries old but relatable even today.  Her vision was to bring these tales to the urban audience, who are globally aware, but have no connect with the treasure trove called the folk lifestyle.

What exactly does the Urban Folk Project do?

The projects that will be showcased at the festival are all currently works-in-progress, and all grantees are hard at work to ensure a great festival.Here are some glimpses from the making of Shilpa Mudbi Kothakota's project, "Yellamanaata Mela".With- Goethe-Institut Bangalore, The Ladies Finger & Sandbox Collective

Along with husband Adithya Kothakota and Sumitra Sunder, an art historian, Shilpa chalked out a trajectory to discover and project folk lifestyle on an urban stage.

One of their first initiatives was Yellamanaata Mela, a production that has been staged at several forums and met with remarkable acclaim.

The play tells the story of the goddess Yellamma, who is worshipped by Devadasis, Jogathis (transgender disciples of the goddess), cross dressing disciples and others. This community sings, chants and tells tales about the goddess, using musical traditions that have been handed down over the centuries. Interestingly, their musical instruments are considered untouchable by other sections of the society.

How can you get involved with UFP?

Check their website and follow them on Facebook and Instagram to stay updated with new developments or events. Or, head to Cubbon Park every morning at 7:30 where you can meet Shilpa. She conducts singing classes to share the songs that she has been collecting while traveling across Karnataka hinterland.