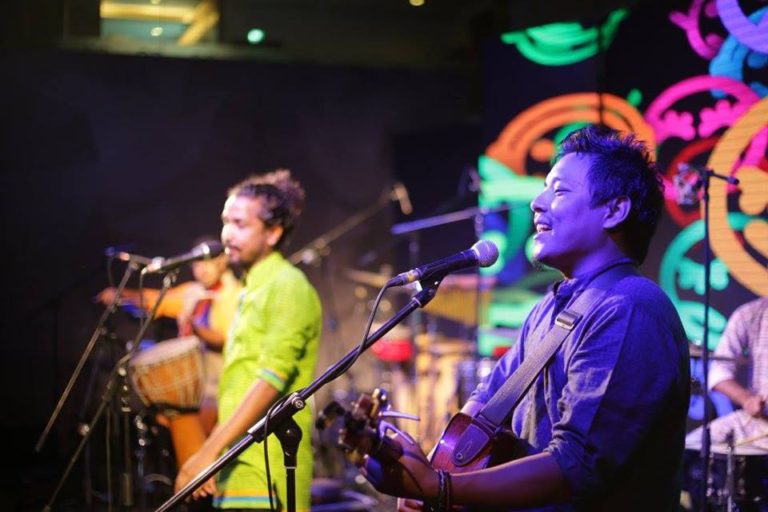 If ever you think of Kabir, the Indian mystic poet of the 15th century, it’s not likely that your next thought is of the dreadlocked Rastafarian reggae superstar Bob Marley. And yet, combine the two, and you’ll experience the music of ‘Kabir Café’.

This fusion rock band from Mumbai breathes life to Kabir’s verses by setting them to an eclectic and completely unconventional mix of Malawi folk, Carnatic, reggae, pop and rock music. It’s unlike anything you’ve heard.

Lead guitarist Neeraj Arya, once a protest singer associated with social campaigns, first came upon Kabir’s poetry during a screening of the movie “Had-Anhad” (Bounded-Boundless) by Shabnam Virmani, which explores the legacy of the poet. Arya was inspired, stating in an interview with DNA India, “I had never heard anything like it before. I realised that no one speaks about equality and humanity in their songs. I was moved and decided to tell people what the great poet had said.”

His bandmates, Mukund Ramaswamy, a seasoned Carnatic musician who plays the violin, Raman Iyer who plays the mandolin, Viren Solanki, a freestyle drummer, Mukund Ramaswamy, a Carnatic violinist and Poubuanpou Britto KC on bass guitar, joined the project after a couple of years. “It was lucky coincidence and destiny brought us together” they remarked in an interview with the Goodwill Project.

The band rose to fame with their song ‘Fakiri’ that was featured on the television series, ‘The Dewarists.’ Their independent album, ‘Panchrang: Musical Echoes of Kabir’ blends poetry couplets and melodies featuring an impressive variety of instruments and different genres, influenced by a slew of music greats including Bob Marley and Indian Ocean.

The music is honest, personal and poignant, beckoning listeners to pause and take in the lyrical beauty and philosophy of the poetry which preaches mindfulness and inclusivity, a message that is as relevant today as it was hundreds of years ago.

To get a taste of the band’s distinct blend of the soulful and the cacophonous, check them out on Youtube and Facebook.