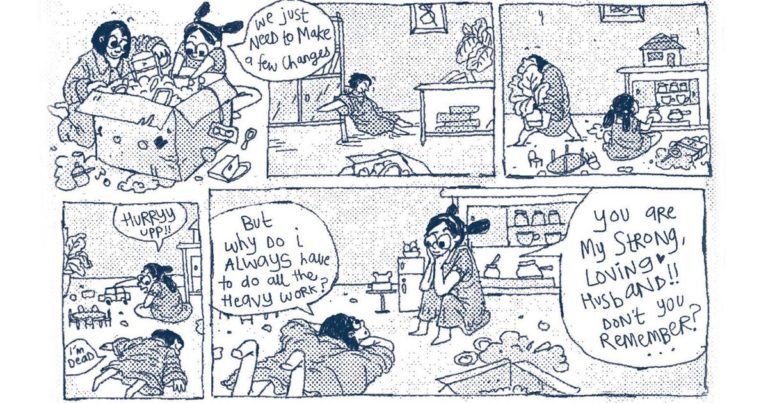 A self described work-in-progress, illustrator Priya Dali uses her art to deal with questions of sex and identity. Her graphic story ‘I Wanted to be the Man of the House’ is a personal reflection on her journey with sexual identity and gender expression. Dali’s work is an attempt to respond to the question queer individuals get asked frequently – “When did you know?” Her response is an adorable story of two children engaging in the game ‘ghar ghar’, where one is always playing the part of the man. 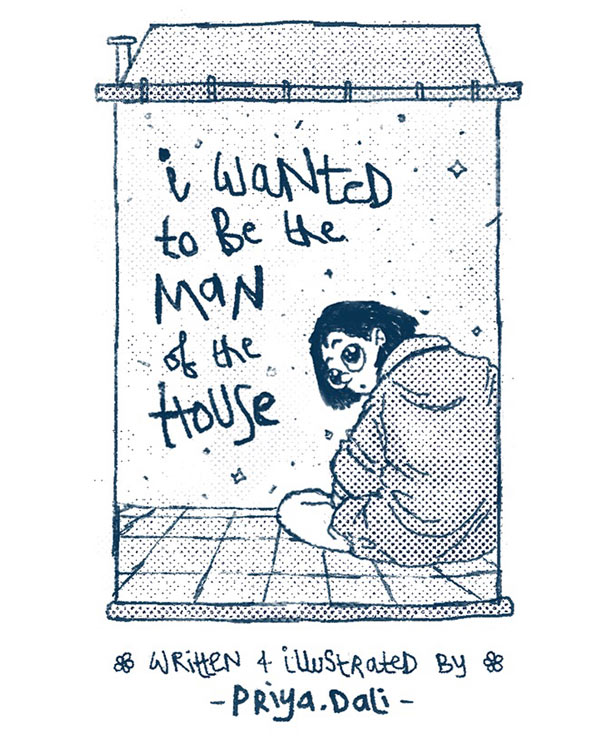 What was the inspiration and motivation behind this comic?

At one point I was just trying to analyse the whole ‘moment of realisation’, which is when people keep asking ‘when did you first realise you were gay’. I realised that it’s something people have a lot of curiosity over and it was something I never really questioned for myself. I was curious as to whether there was any specific point in my own childhood that I could point at.

I used to always play ‘ghar ghar’ when I was a kid. And because I had short hair I would always end up playing the boy. I realised that I didn’t really mind playing the boy’s part because at least in a fictional way it went towards my idea of how families could be. I don’t think I ever realised it at that time, but I saw a lot of other people rejecting the idea of playing a boy. I never really did that so maybe that was a hint.

It might not be the same for everybody. It’s not like everybody who plays the boy and doesn’t mind has to be gay. But for me, it happened to be like that. It was a very interesting insight and then I realised that there might be a lot of people who might understand or relate to this as well. While what happens in the comic was not exactly how it worked for me. It was definitely similar and inspired it. 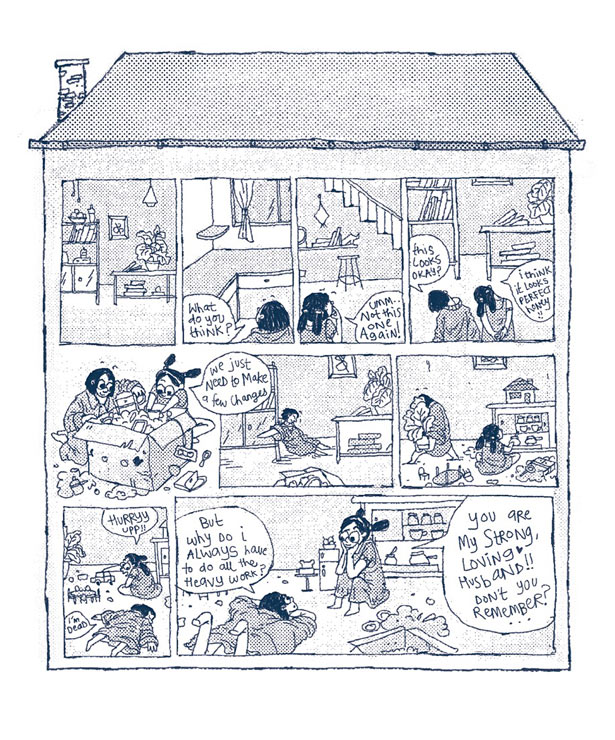 What is your experience with traditional gender roles?

I grew up in a slightly traditional family, but then it was more matriarchal than patriarchal. I never really played into gender roles so I would always question things like a boy getting priority over a girl.

My mother would never really try to enforce any of those roles on us as such. If they ever did, I would always revolt against it. In that way it made me realise that it played a major part in shaping my identity. It wasn’t something I realised in that moment, but if I were to analyse it then I realise it’s something I’ve been doing for a while now.

It’s funny because always the more boyish looking kids are forced into certain roles or towards certain activities.

Do you think that imposing gender norms onto children is harmful?

I can’t speak for anybody else, I’ve had a very privileged childhood and never had any backlash to what I’ve made. With gender roles also, I’ve never seen it even with anyone around me. I guess it is quite annoying to even see my friends go through it because they keep talking about the kind of stuff they go through, which might be very basic, but still important.

I know that older people revolt as well, because when we try to point out something, they dismiss us. But then I think it’s a part of the process, eventually they do understand and give up on trying to enforce those things. At least, that’s how it’s been in my house.

It’s not like my parents were the most liberal people from the very beginning. It was my sister who took the first few steps and pointed things out to them. So then eventually they started to be more open about things.

It has to start from home is what I’ve always believed. Because you can go teach other people, but if you can’t enforce anything at home and try to create some change there then there’s no impact. So if you can educate your parents about certain things, there can start to be some change. I feel like there is a point where parents teach us, but there’s a point where you can also teach your parents certain things. So I guess eventually kids also have to take that role up and once they are educated enough and adult enough, then they can talk to their parents and have more open conversations. 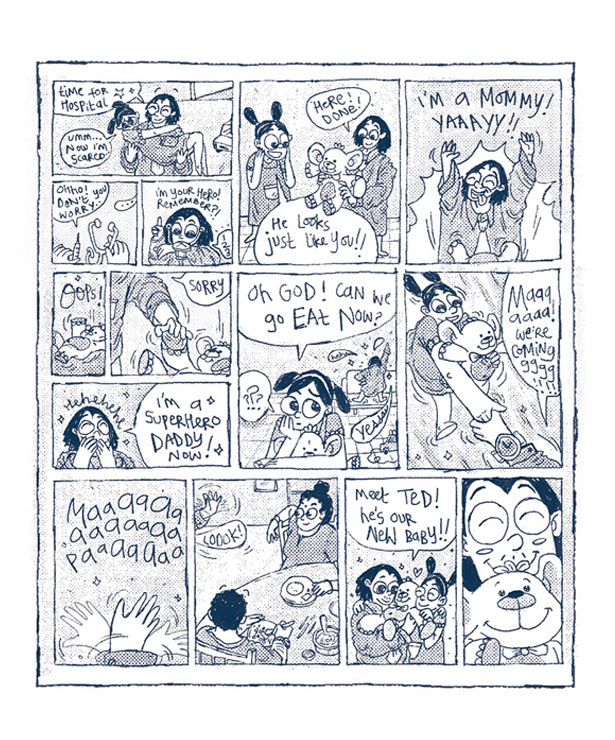 Why choose to do it from a child’s perspective?

I had a specific reason for doing that. When you’re a kid you’re given so much freedom, you’re allowed to do a lot of things, and you’re allowed to mess up. But the older you get the more restrictions are forced on you. At that young age you have the liberty to imagine yourself however. So then it was interesting to see how such a simple game has so much complexity to it

It’s a game that all of us played, and this is just one way in which kids imitate the roles they see outside and also question them.

I thought it was very interesting because we place a lot of focus on families and the game reflects the different relationships you’re enacting.

The experience of children playing such games freely is unadulterated. Children are pure and innocent, whereas adults have their own issues and complications. So in that way it felt like a good fit. 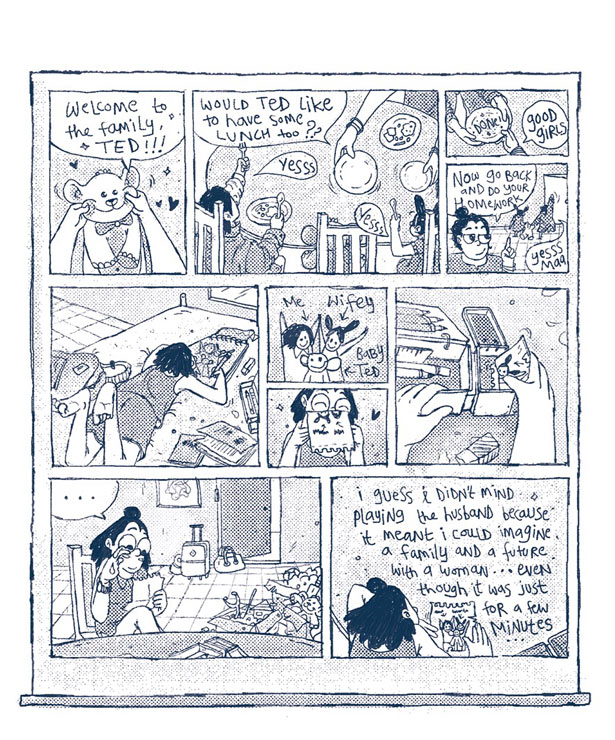 Was any of the response you got negative?

None. Not personally or even through social media or anything at all.

Dali’s comic ends with the powerful thought “I guess I didn’t mind playing the husband because it meant I could imagine a family and a future with a woman… even though it was just for a few minutes”. It’s a simple thought, but one that plagues the minds of many people who are coming to terms with their sexuality. For Dali, playing the role of the man was a way to make sense of her own identity, in her own way.