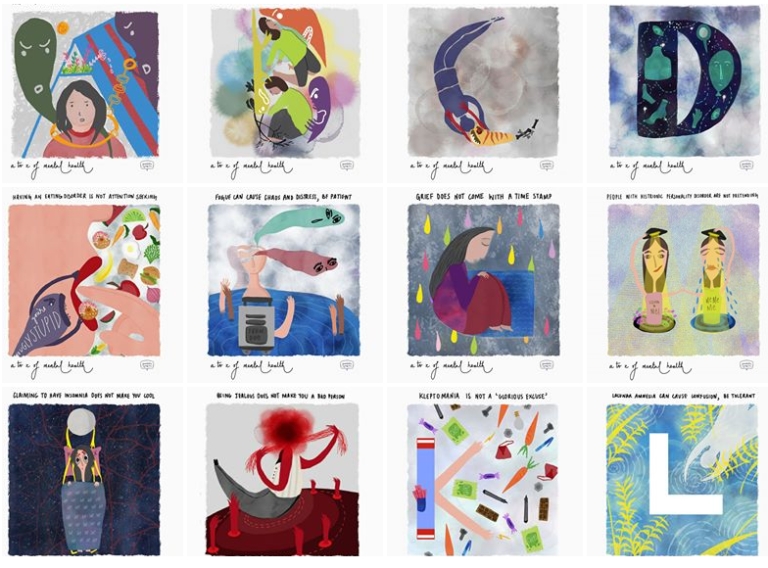 “A picture paints a thousand words” may be a cliche, but the statement is often true, and is so proven by Sonaksha Iyengar’s intriguing series of illustrations depicting the A to Z of mental health.

Prompted by the 36 Days of Type challenge (to design a letter or number for each day),  Iyengar decided to use the challenge to try to give visual representation to some of the mental illnesses that affect millions daily. Each illustration (A is for anxiety, B for bipolar disorder, etc) sensitively tries to explain what these illnesses really are like, explains to others who may not understand the severity of some diagnoses, and highlights that it deserves just as much sensitivity as any other health condition.

1) What spurred Iyengar to create this series?

“I think my own struggles and experiences with mental health have always made their way to my work – whether it is writing or illustration, but I hadn’t done an entire series based on it. So when 36 days of type came along, I really wanted to focus on mental health,” says Iyengar.

“Since, mental illnesses and disorders are invisible, they are not acknowledged and sometimes even ridiculed. After having numerous conversations with friends about the stigma associated with it, I really wanted to create something tangible to start a conversation,” she says.

2) Each illustration is quite distinct – how was each image conceptualized?

One of the biggest problems with the way we approach mental health is that we assume the person is lying or faking it. That their pain and struggle is not real because they might not be screaming, or bleeding. Stop. Stop filling our quietness with your erroneous assumptions. Stop thinking that just because we appear calm on the outside, we're fine on the inside too. Just because we might not have a visible gash, it doesn’t mean that we're not hurting on the inside. Our heads might be jumbled in a ball of knots, tugging against each other but we may still remain quiet. It doesn’t make our pain any less real. #atozofmentalhealth – – – – – #365daysofart #drawingaday #36daysoftype @36daysoftype #36days_Q #36daysoftype04 #mentalhealth #art #typography #lettering #poc #quiet #silence #pain #watercolor #igart #sketchbook #digitalart #illustration #selflove #care #endthestigma #huffpostarts #brain #invisibleillness #mentalhealthawareness

Iyengar explains that she spent a lot of time reading case studies or first person experiences on forums.

“Some days I’ve just been so pained by the kind of struggles I’ve read about that I just wouldn’t be able to bring myself to draw. But, of course, I know that the intensity of reading about someone’s pain is not even remotely comparable to the person actually feeling it so that kept me going,” she says.

“There’s no way to actually entirely comprehend the struggle that people go through, but I think art helps us take a step closer to making that attempt and that was the hope. So I tried to break a lot of myths typically associated with these disorders/subjects and using a combination of mental disorders and illnesses with emotions that a lot of us perhaps feel, in varying intensities.

3) Is there anything she hopes to achieve with the drawings?

It is really disheartening to see people make assumptions about mental health, illnesses and disorders. So with the series, I hope to address mental health using a combination of mental disorders and illnesses with emotions that a lot of us perhaps feel in varying intensities. Awareness will help us make a start in the right direction towards kindness and empathy.

Secondly, I hope that I’m able to reach out to people who are fighting these battles with their health every single day and tell them that they are not alone. There’s some kind of comfort in knowing that there’s someone else who is at least making an attempt to understand how you feel.

Also, I hope people will spend at least a few minutes of their day reading up about these topics and engaging in discussions with each other about them. We really need to stop talking about mental health in hushed tones and be more open about it” she concludes.

Whether or not you can directly relate to them, Iyengar’s illustrations raise awareness and encourage people to join in a conversation surrounding mental health—which is exactly the point.