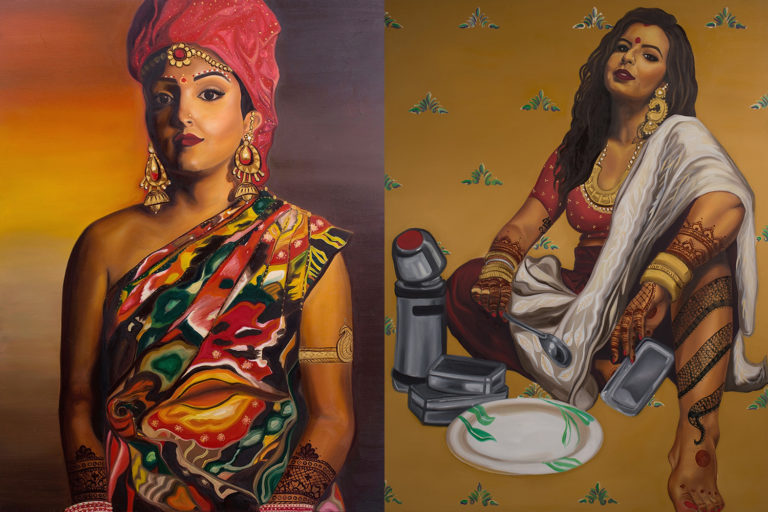 Girls from respectable families don’t stay out so late.

Welcome to the world of an Indian woman, where the main dish comprises of archaic and restrictive rules with a side of unsolicited advice and complimentary shame. You may be highly educated, extremely talented and financially independent; but for the society you will never possess any agency. Not only that, women’s sexual expression and empowerment is considered “un-Indian” and immoral.

To the rescue come the following artists, armed with pencil, brush and style. Kick-starting conversations on taboo topics including sex, menstruation and other age-old stigmas attached to women prevalent in the society, these artists are challenging what it means to be a good Indian woman.

“In order to be a good bride and bahu, you must…”

Indian brides are expected to be the epitome of purity. A suitable bride must be subservient to her in-laws and her husband, must know how to cook, and most important of all, must be a virgin. Dismantling this idea of the typical Indian bride through their art, artists like Nimisha Bhanot and Anu Chouhan are here to represent brides and bahus who are sexually confident and bold.

"Puth, you should be settled with a husband now that you're 30, and preferably with a baby on the way. Aren't you worried that you're still not married?" "Nah, aunty. I'm just upset by the fact that I haven't had ramen all month yet 💁🏽‍♀️🍜" . . New art on that way, guys! I'm just still in vacation recovery mode 😷😴 . . . #oldart #anumation #illustration #drawing #desigirl #indiangirl #desibeauty #art_spotlight #artistsoninstagram #vancity #vancouverartist

Shaming women for embracing their sexuality could easily be the national sport of the country. Women want sex just as much as men but are conditioned to repress their desires. They are taught since childhood that being sexual is equal to being a slut and thus they associate feelings of guilt and shame with sex. Pranjali Dubey, who is the mind behind the Instagram account ‘kalmuhi’ (which is a derogatory slang used for women who go against societal norms; literally meaning a woman who has blackened her face in public) creates simple sketches that are often paired with humorous comments on the society.

“Being a mother fulfills you.”

A woman must get married as soon as she crosses the 20 year mark and must produce children before turning 30. Motherhood is considered sacred in India. A woman is complete only when she bears and the idea of a woman who does not have children by choice shocks the Indian society to its core. Annushka Hardikar of the ‘Oh Nari So Sanskari’ zine fame often questions the archetypal roles of a woman in contrast to the modern society.

My new puppy babies have made me realize just how OKAY it is not to go through labour and all the scary stuffs that follows to birth human ones! Heehee 😋 Anybody else feel that way? Follow the link in my bio if you want to shut all those loudmouths who ask when the ‘good news’ is coming ☺️ Buy some beautiful quality original art for your house and be shunned from society!! . . #buyoriginalart #sanskarmax #ohnarisosanskari #illustration #popart #vintage

For men, anti-smoking and anti-drinking advice is usually health-oriented but when it comes to women, it becomes a matter of morality. The sight of a woman smoking often attracts judgemental stares and comments about one’s character. Without promoting smoking or drinking, accounts like sam_madhu and Bindi on fire are trying to safeguard women’s right to choice. Like sam_madhu says, “It’s more about showing a female character who is not bound by gender-specific stereotypes.”

I´ve been receiving so much love since my last post. Thank you everyone.💚✨ • Here is my next one. • Smashing the next stereotype: "Southasian brides should be shy, conservative and traditional." "Girls should get married at the right age." "Girls don´t drink. Girls don´t smoke." "Lower your gaze. Don´t smile/ laugh." "Don´t dance at your wedding." • I am not promoting drinking or smoking! It´s more about showing a female character who is not bound by gender-specific stereotypes. • • • Inspired by @angira 🌼

The work by these artists reminds us that these restrictions and rules society has imposed on women are obsolete and have no basis in logic. It is about time we put an end to them.