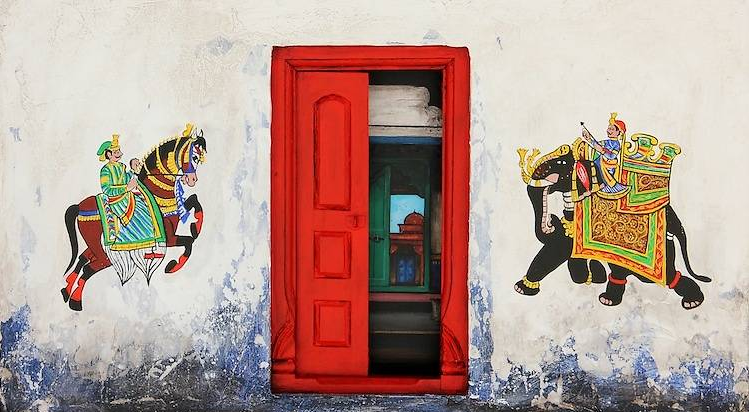 Giving us a peek into the India of yore, 38-year-old artist K.R. Santhana Krishnan uses doors to reflect history and heritage, and narrate old-worldly tales that take you back to simpler times.

His fascination with doors started early on, as he cycled through the streets of Kumbakonam in Tamil Nadu, looking at half-open doors and imagining poetic worlds inside. Eighteen years and 800 doors later, he now gives audiences the same experience he once had, skilfully using acrylic paint and actual wooden doorframes for his art. In a world where doors are usually closed, used to seal away oneself, his doors offer a passage.

“Just the way the smell of a perfume takes you back to a certain era, I attempt to do the same with doors,” says Krishnan, for whom the doors of Tamil Nadu have remained the overarching theme of his work, even earning him the affectionate nickname Door Santhanam.

He believes that it is the depth and not the range of your subject matter that counts. Holding crucial clues about the people living behind those doors, his hyper-realistic images infuse rustic paraphernalia like the tulsi mandapam, traditional lamps, water pumps, old advertisements, and makeshift clotheslines. Some images even have traces of census markings and ward numbers — all of which create a narrative of lives lived, and changes incorporated.

Back then, doors reflected the personalities of the people who lived inside; unlike today’s doors that are depressingly uniform. With incandescent blues and light-soaked oranges, Krishnan reanimates life in those times and makes you wonder whether the landscape is the only thing that’s changed.

Want to see more paintings by Krishnan? Head over to his site  or his Facebook page.