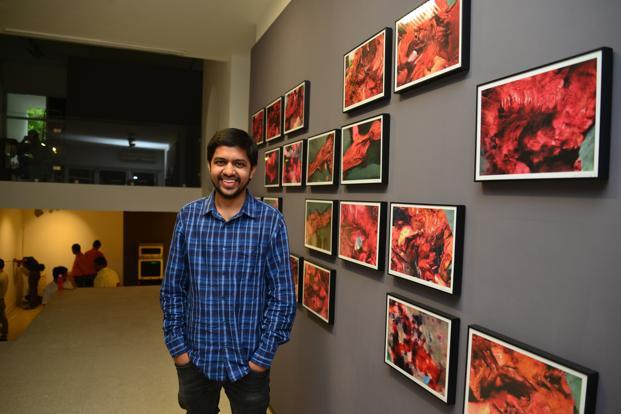 An increasingly automated world is forcing us to rethink and redefine basic, fundamental concepts of ‘art’, ‘creativity’ and ‘humanity’. The dynamics of the human-machine relationship is constantly in flux and the ramifications it will have on the future are yet to be determined.

Is this the end of humanity as we know it? Or the dawn of a new age? Should we be threatened by AI? Or embrace it to unleash superior human potential?

The ‘Gradient Descent’ show which was organised by 64/1, a curatorial collective focused on art for the Post-Human age in September 2018, focused exclusively on artwork actually created by human artists in collaboration with AI.

Karthik Kalyanaraman, co-founder of 64/1, shared his views about AI art and the implications it may have on artists and their creative process with us:

1. What prompted you to curate this exhibition?

We felt that AI was here and here to stay.  Artists needed to start confronting this new phenomenon that threatens to rapidly accelerate the mechanization of labor.  In the past couple of years the ability of AI algorithms to produce aesthetically compelling visual images has exponentially increased so we thought it was the right time to showcase this work.

2. Can you tell us a little about the artists and the work showcased at the exhibition?

Gradient Descent brought together 7 pioneering international artists who have adopted a radically new aesthetic practice: their final artwork is created by an artificially intelligent (AI) algorithm. We chose artists working with a diverse group of AI algorithms, media and stylistic sensibilities.

3. Should we just consider AI simply as technology that complements the artist’s role, or as an equal partner in creation? If it is the latter, what does it imply about the role human-ness, consciousness or a sense of aesthetics plays in creating art?

It really, right now, is just the former.  A human writes the AI algorithm, a human curates the examples it is shown to train it in a visual style, a human trains the algorithm and a human curates the final work.  So while there is an undoubted mechanical contribution to the final image, I don’t think we can talk AI as an equal partner. Such talk implies AI has agency, and it simply doesn’t.

4. Do you think human-collaboration with AI (as was the case for the exhibition) is necessary for viewers to be able to relate to the artwork? And if so, do you think art made solely by AI should be considered as art in the first place?

There is no such thing as art made solely by AI! The AI of today is a piece of code with no volition or autonomy.  And until we can talk of autonomy in a meaningful way the question of the artwork made solely by AI does not arise!  The marketing of the work by Collective Obvious by Christie’s was just that, pure marketing. It was the kind of marketing that deeply upsets the artists who work with AI, because it disregards the work they do and is not based on any competent understanding of the AI art process.

5. How can AI challenge or push artists creatively?

It certainly can! Somewhat like the permutation games of the Surrealists or Oulipo,  machine perception of similarities and beauty, though in the rough by humans, tends to surprise in its details.  That kind of surprise can lead an artist to explore the peripheral regions of her aesthetic consciousness.

Take Anna Ridler’s work on The House of Usher, for instance.  She trains the AI to produce film stills based on her drawings and then produces a new set of drawings from those film stills In a radically different style. So she is using the machine to expand and vary her aesthetic consciousness and prevent it from getting stuck in a recognizable ‘style’.  This breaking of style, as Helen Vendler, calls it, is an act of great bravery and potential for some artists and AI can help in this act.

64/1 is an art curation and research collective focused on building public understanding of how artists and artificial intelligence can come together to create art for the post-human age. It was founded by Raghava KK and Karthik Kalyanaraman out of Bangalore, India. Raghava KK is a multidisciplinary artist, TED speaker and TED curator. Karthik Kalyanaraman is a former professor of econometrics at University College London and University of Maryland, College Park.