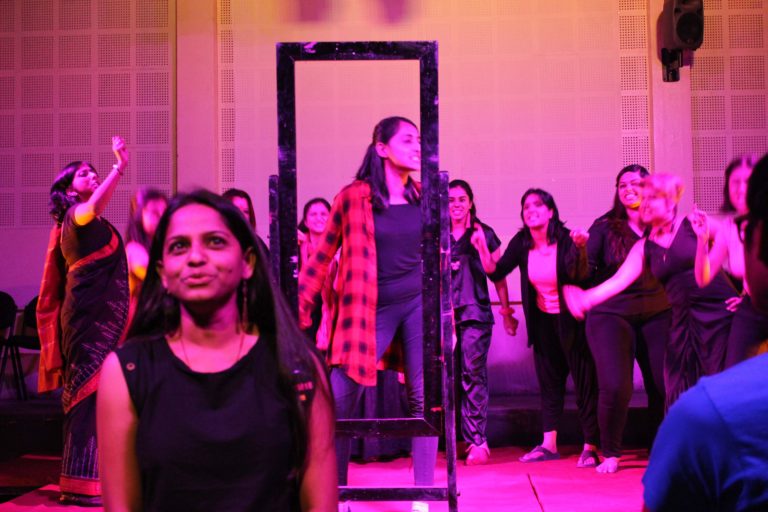 The Vagina Monologues produced by Quiver Productions in collaboration with Vidyaranya, makes you laugh, brings you to tears, riles you to anger and drives you to think harder.

The episodic play is a collection of stories written by playwright and activist Eve Ensler, drawn from the real-life experiences of hundreds of women. Topics explored in the monologues include sexuality, virginity, body image, gender-based violence and pretty much everything else involving the vagina.

Directed by Nishu Dikshit, the Quiver cast captivated audiences with each monologue, with each actress fully committed to her role. We chatted with actresses Julianna Maria James and Swati Vittal about the show.

“We wanted to stay true to the original script”, explain Swati and Julianna. “However, at the same time we wanted to make it relevant and relatable for the audience. We wanted the audience to feel connected to at least one of the characters, so we added subtle Indian touches to the monologues.”

“Being preachy, blaming people, male bashing – we didn’t want to do that.”

How much do you relate to your characters?

“Well, I relate zero to my character”, says Julianna. “The character I play is confident and bold. I, on the other hand, am completely the opposite.But I think I’m a little sassy like my character is.”

Swati, who performs ‘My Angry Vagina’, says “From tampons to gynae issues, there’s no woman who wouldn’t relate to my character.” She points out “However, I didn’t want it to look solely like a rant, so I built on the character, maintaining a connection with the audience to make what my character said identifiable and relatable.”

The first script was written in 1996 by Eve Ensler. How relevant do you feel it is today?

“It’s still surprising how relevant it is”, says Swati.

The thunder that the Vagina Monologues has at this movement is because of the many people who are coming to watch it because they relate to it, and this is upsetting in a way. It tells us where we stand, and how far we’ve come, and how far we have still to go.

How do you relate to people who get uncomfortable or don’t relate to the material?

The Vagina Monologues is alarmingly true – and this actually drives away a lot of people.

There are some who still consider certain subjects as taboo. They don’t want to talk about sex and specifically vaginas in the open.  We want to invite these people to come to the show, at least for the entertainment. And by the end of the show, we hope it lingers in their memory and resurfaces later.

“As humans we keep wanting to stay inside our comfort zones” says Swati, “but hasn’t art always been about pushing the boundaries?”