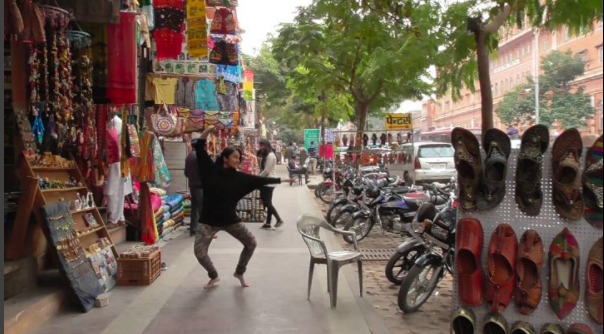 If you saw someone performing a classical dance, clad in a tee and jeans, smack dab in the middle of a busy street, how would you react? You’d certainly be taken aback. Perhaps confused. Definitely perplexed. Nothing fits. If it is a classical dance, you’d assume it should be performed on stage, right? And in suitable clothing? Well, these are exactly the kind of notions that docu-series ‘Bharatanatyam In The Wild’ wants to dismantle.

What is ‘Bharatanatyam In The Wild’ (BITW)?

Much like the imaginary ball in play here, we kept bouncing around from one colourful Calcutta alley to another with Divyani, who skilfully led us in and around the neighbourhood she grew up in. This is just one of the many videos in which we drew from Calcutta's unique aesthetic.dancer – Swathi Gangadharanfilmed by Aishwarya Kaliedited by Priyanka Kali

Posted by Bharatanatyam in the Wild on Sunday, 14 January 2018

When you follow BITW on social media, you’ll see lots of short dance videos featuring a woman performing Bharatanatyam on platforms, bridges, near rickshaw stands and other public spaces. This dancer is usually Swathi Gangadharan, a trained Bharatanatyam dancer. Along with Aishwarya and Priyanka Kali, who came up with the idea for BITW, and early collaborator Tirna Sengupta, these are the women behind the docu-series.

The videos explore the idea of reclaiming public spaces. “We were surprised that no one has done something like this before. It is a really simple idea,” says Priyanka.

Where are the videos filmed?

The team have made videos in Delhi, Jaipur and Kolkata, where the Kali sisters live presently. But as their dancer is in Delhi, making BITW has become a challenge, as the creators do not plan out their videos; they take pride in the raw approach of each, believing that the idea is more powerful than the tools.

Aishwarya explains, “When Swathi visited us in Calcutta, we would leave every morning, go to a random place, walk around and we shoot pieces. These pieces would come together to form one video. Ninety nine percent of the time it is unplanned.”

“We can’t really plan ahead because we never know what kind of space we will have. When we go to film, we find the spot and we do it right there,” she adds.

In Johri Bazaar, Jaipur #2 We had to bring to bear all possible mediums of communication – phone calls, hand signals – to make this one materialise. Our camcorder was hanging out across a busy road, and capturing the dancing meant not-capturing @aishwaryakali who had to resort to timely ducking behind a conveniently placed exhaust. Jaipur's Johri Bazaar has many accessible rooftops/terraces belonging to a jumble of homes and offices it seemed, but no one shooed us away so we'll assume we weren't trespassing for now. Suffice it to say, there weren't many staircases we didn't climb that day looking for this video. Dancer – @swathi_ganga Filmed by @aishwaryakali & @priyankakali Edited by @priyankakali #BharatanatyamInTheWild #dailydanceoff #dancersofinstagram #dancevideo #dance #dancefilm #artofmovement #cinedance #screendance #danceoncamera #bharatanatyam #bharatnatyam #videography #videographer #videooftheday #videogram #videoart #videoinstagram #videoediting #videoedit #nofilter #mussoorie #windows #framewithinaframe #DIYfilmmaking

Reclaiming public spaces is no easy task. Both Aishwarya and Priyanka agree that the inhibition of doing something like this is always there in the back of their heads.

“Every time we film the videos, the inhibition of being in a public space comes back. So, we have to throw off those inhibitions again and again. It is generations worth of conditioning women that we are trying to undo here,” they say.

“When I dance on stage, all these curtailments come in. They always reinforce a particular idea that a certain dress or makeup is appropriate for this kind of dance. You are not a person, you are an artist” Swathi points out.

“When I go out in the street, the dance is the same – I don’t tinker with the choreography or form at all – but you suddenly have the perception that your body is somehow visible. It makes you aware that you are in a space that is not used for dance.”

“And when your body comes into the equation, you’re very aware that you are a woman in a public area that is deemed unsafe for women”, she adds. “ When you are on the stage, you want to draw attention to yourself. But on the street, women always try to draw the least amount of attention. These are the two things that internally clash. As a woman I don’t want to draw attention to myself but as a performer I have to.”

The reactions BITW has received

Those who revere classical dance as a high art might frown at the dance being taken out of its conventional setting.

For instance, once when performing outside the metro station, BITW drew the attention of a small group of autowallahs. When they finished, another man standing there went up to the team and said “Autowale bhi dekh rahe the. Aapne jo ab kiya who famous hone ke liye kiya? Par aap ko yeh bhagwaan ke liye karna chaahiye.” His issue was that the performance was seen by onlookers from a lower class. That was the craziest response but it confirmed a notion that the creators had suspected for a while. “Something like BITW upsets people too”, says Priyanka.

The Kali sisters have an answer ready for such people. “Classical dance is powerful and glamorous because of the choreography, the costumes, the thought put into it,” they said. “But, the high art status also makes it inaccessible.”

They point out that the dance form wasn’t even called Bharatanatyam in the first place. “It was called Sadir. It was a worship form practiced in temples by Devdasis. Yeah, these are lower caste women. They have lower caste Tamil roots. And then in the 20th century, it’s made out to be something completely different,” they said.

BITW is definitely a dance step in reclaiming public spaces for women. Click here to read our interview with Girls At Dhabas which strives towards this goal too, through loitering and hashtagging.

After the docu-series, a full-fledged documentary is in the works for BITW. You can also look forward to a new episode titled Avant Garde by Default- only one of 4 more episodes to come!. Be the first to learn about these by following BITW on Facebook and Instagram.

Images credit: Bharatanatyam In The Wild