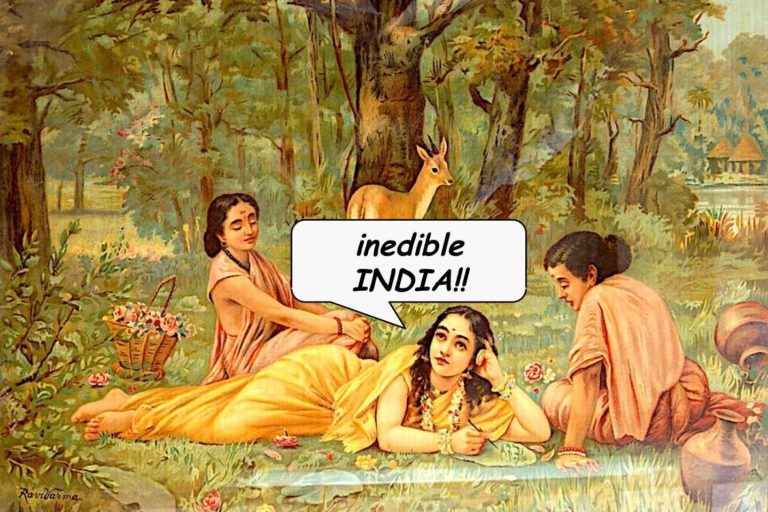 With hundreds of socio-politically satirical comic strips floating around the internet, Rajesh Rajamani, a banker by profession, knew that if he was going to jump on to the bandwagon, he’d need something to set him apart from the rest.

Inspired by the ‘Royal Existentialists’ created by Aarthi Parthasarthy, Rajamani decided to use paintings from the Mughal era, and those by Raja Ravi Varma (which are mostly based on Indian mythological characters and stories) for his own strip. He adds thought and speech bubbles to the people in these paintings, offering an opinion or sarcastically comment on different issues that have cropped up in recent times, or a pre-existing one that we usually turn a blind eye to.

Why did Rajamani name it ‘Inedible India’? “I wanted to talk about social inequalities and eccentricities, which we couldn’t and shouldn’t digest”, he explains.

Consequently, the strip offers satirical commentary on issues such as gender inequality, caste discrimination, victim-blaming, clothes shaming, and even casteism. Rajamani shines a light on issues that usually disappear with privilege as he depicted in one of his comics that sarcastically created a hierarchy in which people could seek solutions to their problems – set in order of privilege of course. Each panel provokes and illuminates, making readers laugh and at the same time forcing them to think or re-think an issue.

One of his most recent comic strips tackles the problem of high air pollution in Delhi as part of #NoBreatheNovember in which different artists depicted their vision of the smoke/fog-filled future. Rajamani offered a panel completely covered in smog that keeps every speech bubble and character hidden – simple, funny and effective.

Here’s a look at some more of his comics: