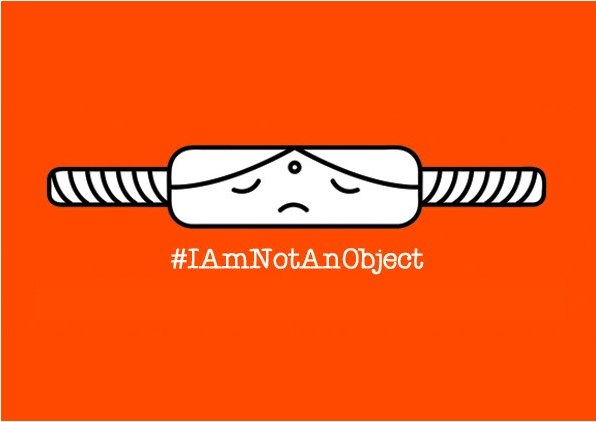 Despite encouraging signs of improved visibility and awareness about gender equality, there still exists major systemic problems that are so interwoven with logic and language used everyday, that they often go undetected.

The Seesaw Project brings attention to issues that are normalised through frequent usage or occurrence but are actually problematic, challenges stereotypes and sparks serious and meaningful conversations about gender bias through use of design, painting, photography, music and short films. Their pieces are subversive and jarring. They can also be cheeky and humorous. In each, voice and vision combine to form powerful commentary.

The initiative was started by Sakshi Choudhary who comes from an advertising background, working as a creative supervisor at OgilvyOne Mumbai, and is spearheaded by her, Jnana Prasanna Kumar Sarvasiddi (Jpax) and Burzin Mehta.

Describing their reason for starting the initiative, they state

“Our country has the world’s largest youth population. But it also has one of the world’s highest female infanticide rates.

We are among the few countries to have been led by a female Prime Minister decades ago. But we still condemn the birth of a girl child.

The media is abuzz as manic competition drives our youth to depression. But we insist on reprimanding a boy who dares to shed a tear.

None of this felt right. Just like it didn’t feel right to do nothing about it. And that’s why The Seesaw Project was born. To help simplify the complexities of gender equality through a language all of us comprehend – art.”

Their first series ‘I Am Not An Object’ tackled gender biases at home debuted in September 2016, and they’ve launched several projects since then.

The ‘Don’t Be a Man’ series for example talks about how certain activities or behaviours are characterised as ‘masculine’ or otherwise.

Here's presenting our second series #DontBeAMan, that throws light on how patriarchy affects men too. World over, the suicide rate of men is more than twice that of women. Different studies owe it to emotional suppression and the constant pressure to 'be a man'. Check out our entire series on the Seesaw Project site (link in the bio). #GenderEquality #Men #Feminism #BeatPatriarchy #GenderBias #Art #ArtForACause #illustration #TheSeesawProject #ArtForGood

For instance, young boys are taught and told very early on how to “be a man” with social reproofs such as “don’t throw/act/cry/dress like a girl.” The series tackles this toxic masculinity through artwork, urging men to go for ballet lessons if they want, to cry freely over a heartbreak, to be absolutely in love with their bodies (with or without biceps), and to respect and support their wives ‘ careers.

And ‘Swear Without Her’ helps people think of creative ways to swear that don’t reduce women to objects of sexual abuse.

Swear Without Her 9. Is it possible to swear without reducing a woman to an object of sexual abuse? Sure it is. #SwearWithoutHer shows you how. #swearwithouther #genderneutralabuses #keepitclean #women #womenempowerment #genderequality #noabuse #girlpower #girl #milkbottle #milk

There is still much that needs to be said, to make people stop for a moment, to look and listen. By bringing powerful artwork to the public, Seesaw encourages people to think about making a change not just as a concept but in practice.

As the Seesaw Project puts it, “There’s really nothing complicated about treating both genders as equals and ensuring the same opportunities for all.” Indeed.