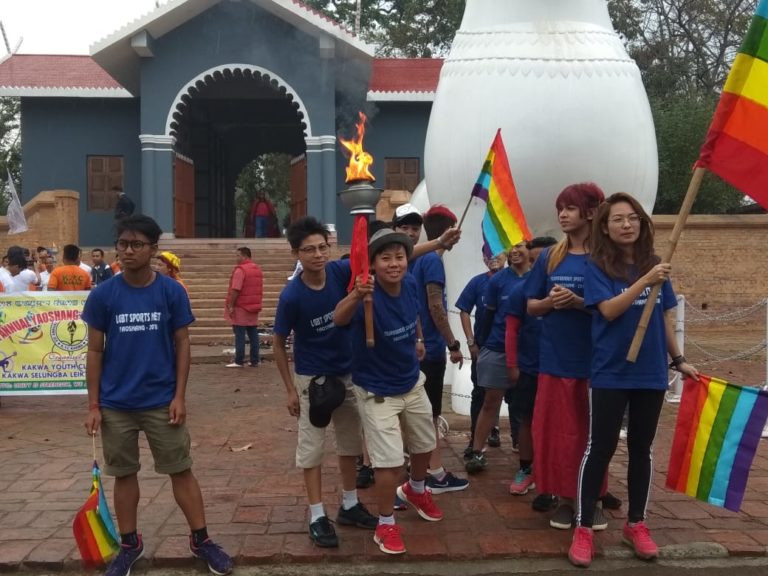 Seeing is believing. Objective representation in media helps people better understand certain concepts that may not be mainstream but are equally important. The same is true when it comes to the representation of minorities. Visibility, along with enhancing people’s understanding of marginalized communities and their lifestyle in a cogent manner, provides validation and support to the percentage of the population who identify with these communities.

Amidst the rising number of queer movements across the country that are working towards increasing visibility, comes ‘The Chinky Homo Project’, the brainchild of Kumam Davidson and Pavel Salgolsem. Their aim: to provide the Northeastern queer population with a safe space to share their stories.

We spoke to co-founder Kumam Davidson about how the Project works and why there is a need for such a platform.

1. What was the inspiration behind the Project?

I have always been inspired by the call for diversity, inclusion and equality which I believe is the foundation of LGBTQIA+ movement. Having lived both in Manipur and Delhi, I personally have bore the brunt of being a queer and a northeasterner or both. I didn’t choose to be called a homo in the first place while growing up in a small town in Manipur, just as I didn’t choose to be called a chinky in Delhi.

Identity labels often come unasked for as you see. What I do in my private life is a different matter altogether but when people (both in Manipur and Delhi) continue to assume my choices, label me and even put identity tags on me, it feels as if I don’t get to choose my identity.

This need to identify oneself from one’s own experience, in one’s language and understanding is partly the inspiration behind the Project.

Despite being in the forefront of queer and other social movements, Delhi’s perception of the northeast region and the experience of its people is problematic. Delhi exudes undertones of racist and regional ethos towards its northeastern people. Therein lies the inevitable need to bring out personal narratives of people whose lives have been misunderstood and invisibilized.

Also, the tussle between self identification and being identified by others began to feel like the story of many other northeasterners, northeastern queers even more so.

2. Why did you decide to call it ‘The Chinky Homo Project’?

The project title happened accidentally. Recently in an interview, I have said that “In February this year, I wrote a short piece about being Northeastern and queer in Delhi, shared it on my Instagram page and changed my account username to ‘chinkyhomo’. The experiences of both subjectivities were always there as a queer migrant from the Northeast in Delhi and at that point, I must have reached the threshold and couldn’t be silent anymore. So, I started blogging on Instagram along those lines, and the first few posts caught the attention of some people including Pavel Sagolsem.”

Later, we two discussed how the two words are catchy and playful, and thus decided to term it The Chinky Homo Project.

3. Was there any backlash that you received or hurdles that you faced?

Yes, the Project has faced backlashes and continues to face hurdles. The title has received criticism from some transwomen, especially from Manipur. They express that it has brought back the word “homo”, an erstwhile marker of their identity that they chose to relinquish. There are other northeastern people who may not necessarily be marked out as “chinky” or “homo” given their region, racial and other identity specifics. We are aware of the shortcomings and we take criticisms seriously and try our best to address them rightly.

The fact that we have neither applied for funding nor are funded by any funding agency, financial and other resources are scanty. We rely on content contributed by anyone who is willing to write and then I edit, collate and put up on the blog while Pavel builds collaboration with other organizations. But we both have our own careers to focus on, to make a livelihood. He works with Nazariya, a Queer Feminist Research Group while I work as an independent journalist. So, it has been a very challenging Project for both of us.

4. Any story which you received for CHP and has touched you personally?

All the stories have touched me deeply. Each experience of the people I have worked with reveals a different experience. I cannot even fathom how each one of them struggled through life’s adversities and become who they are today. But, Dona Marven’s story struck me in a different way. The fact that I actually took a two hours long interview in person brought out a different experience than the others (email exchanges). It’s been a month after the interview and I still get goosebumps thinking about her life.

5. What is next for The Chinki Homo Project?

There are many more works we want to pursue, but due to sheer lack of resources, we are trying our best to work out the logistics to travel and document queer testimonials in more remote corners of northeast from where the conversation on LGBTQIA+ has not come out much as yet.

This particular initiative is conceptualized on the basis that queer discourse in India continues to be urban centric and are often about people with privilege (education, class or ethnicity) and those in the margins of the margin needs to be heard as well. We have been planning this for a while and we hope we will be able to execute the plan and add another much needed dimension to the Project.

6. Now that Section 377 has been struck down, what should be the next step in ensuring equal rights for the LGBTQIA+ community?

377 is partially struck down not entirely. And a question like this is a complex and much larger debate in itself. I am, in no way, the representative or spokesperson to frame the next step as such. However, I will reiterate Supreme Court judge Justice Indu Mahotra’s statement on 377 that, “history owes an apology to the members of this community and their families, for the delay in providing redressal for the ignominy and ostracism that they have suffered through the centuries. The members of this community were compelled to live a life full of fear of reprisal and persecution.” Not history literally, but the larger society can pave the way in ensuring an equal society by beginning with an apology.

And within the community the questions of diversity and inclusion should/can be addressed more strongly than ever. For instance, I keep hearing instances of northeastern queer being called out as ‘chinky’ by community people despite the fact that the offender under Scheduled Castes and Scheduled Tribes (Prevention of Atrocities) Act and can face up to five years in jail.

You can check out the The Chinky Homo Project’s blog here.