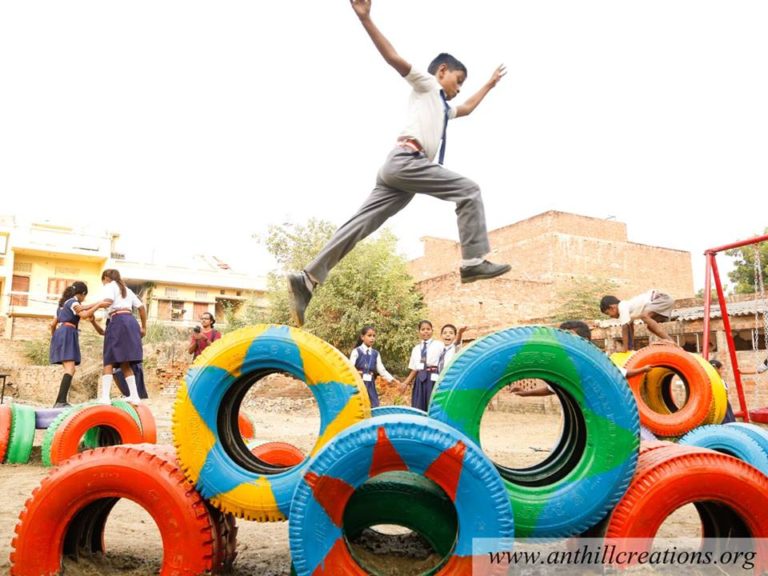 Behind the closed walls of our modern societies, thousands of children virtually play on gadgets. And those outside these societies, use broken sticks and discarded sports accessories to play on abandoned, desolate grounds.

Anthill Creations is here to change this. The social enterprise is working on enabling and encouraging active play for all children by building DIY playgrounds from waste material.

From full-time jobs to spreading smiles

Pooja Rai, Nancy Charaya, Souradeep Paul, Vishesh Gupta, and Nupur Agarwal, a group of 5 ex-IIT Kharagpur architecture students launched Anthill Creations in 2015. During their last year of college, they visited a school for underprivileged children. Upon seeing the children playing with sticks, stones and using slippers to play badminton, the group was inspired to start a playground for them. “These kids definitely deserved much more than this! As architects, we decided to solve this problem and put the knowledge of design we had gained in the past 5 years into something more meaningful and creative,” says Pooja.

The group initially worked during weekends and holidays while continuing with their full-time jobs. But eventually a few members decide to leave their 9-5 jobs entirely while others decided to take up part-time employment so they all could focus on the playscapes.

The project was incubated at NSRCEL, IIM Bangalore, 2017 in association with Michael and Susan Dell foundation.

Before building a playscape, Anthill’s team play a game with the children for whom it is intended, in order to come up with a design. The children are divided into two teams. One team is asked to describe ‘play’ and the second are tasked with drawing what is described. In short, the kids create a medium for themselves which will help them play in the future using a form of play itself.

“When they see their imagination come to reality, the joy in their eyes and the confidence this game instills in them cannot be described in words,” Pooja says.

One of the benefits of Anthill’s playscapes is that they integrate teaching elements for learning through play. The team tells us that they’ve received encouraging feedback from teachers who have told them that the playgrounds have helped children in their physical, social, and emotional well-being.

Another is that the playscapes cost only one-fourth of normal playgrounds and are completely made using cheap recyclable materials such as scrap tyres and drums. The playgrounds are DIY and can be built in just 5 days.

The team also points out that communities come together to build the playscapes, bringing about change at their doorsteps themselves.  “They are not only revolutionizing the idea of play but also creating harmony by bringing communities together,” points out Pooja. 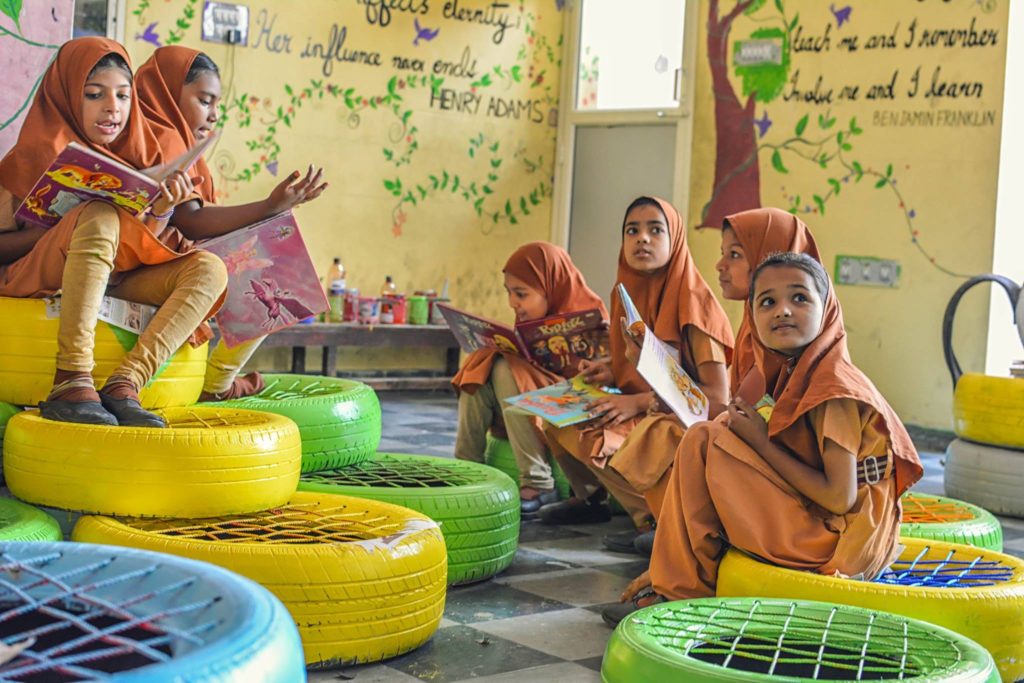 An innovation that started in the backyard of IIT Kharagpur has achieved building playscapes for more than 12,000 children. Twenty nine playscapes are spread across 13 different cities and villages in India and Nepal. And the social enterprise has also set up an innovative library using recycled tires to make chairs and tables for underprivileged kids in Goripalya.

It’s inspiring to see the simple desire of these architecture students to help, touch so many lives. To learn more about Anthill Creations, to volunteer or donate, visit their website or Facebook page.