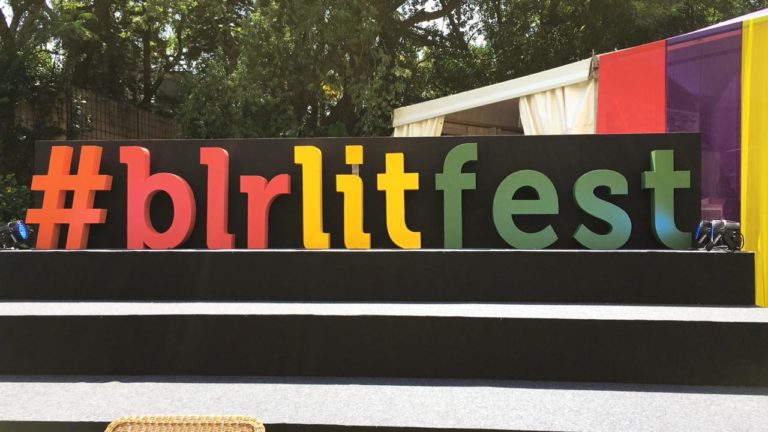 Inhabitants of Bangalore not only braved it’s much dreaded traffic but also the scorching sun to be at the 7th edition of the Bangalore Literature Festival organised at Hotel LaLit Ashok, Kumara Krupa High Grounds.

With an impressive line up of speakers and captivating and relevant panels, the Festival kicked off today.

Here are some of the highlights from Day 1 of the Festival:

The Business of Sex

The debate around legalization of sex trade is one that has been going on for years and transcends countries. The panel consisted of Nora Bossong and Nalini Jameela and moderated by Reshma Bharadwaj. Bossong who has studied and written about the prostitution scenario in Germany and Jameela who was  a sex worker and the President of the Kerala Sex Workers Forum, agreed that legalization of prostitution might not be the answer to destigmatization and upliftment of sex workers as it leads to the normalization of the business as has been the case in Germany. The panel ended with Jameela sharing her belief that the only way to ensure better work conditions and dignity for sex workers is when the sex worker has ownership of the business, with no third party involvement.

The question: In a democracy, why do voters elect criminals to positions of power?

The panel: Three academicians trying to answer that why voters elect criminals to positions of power in a democracy.

Love Jihad, Sabarimala, Urban Naxals. The news cycle is rife with instances of intolerance and illiberalism. Two journalists, Chidananda Rajghatta and Narresh Fernandes discuss this spike in outrage, experienced not only in India but worldwide. They identified two reasons for the rise in all of India being in outrage, all the time:

a) the ideological pendulum is swinging wider and centrist positions are diminishing;

b) Social media leads to polarisation and the speed of technological innovation unnerves the masses.

In a city of nomads, how do you create spaces that mean something to people? A panel with artists based in the three major cities of India, Appupen(Bangalore), Giuilia Ambrogi(Delhi) and Rouble Nagi(Mumbai) discussed the role of art in citymaking. Visual art in public spaces not only give meaning to otherwise empty walls but also provide a platform for artists outside of galleries and museums. These renegades are bringing art to the daily life of urban population while creating contemporary culture.

The Bangalore Literature Festival has scheduled one more day of thought-provoking panels and entertaining events lined up for you.

To attend Day 2 of the Festival, register here.