In a 2018 survey by the Thomson Reuters Foundation, India was named as one of the most dangerous countries for women to live in. The statistics, although shocking, were not altogether surprising, and emphasised the violent reality a large part of the population faces on a daily basis. Women are told to carry pepper spray with them, to not walk around after the sun sets, or to always go out in large groups. Safetipin is an app that works to change the way women live in our cities. It aims to make our cities safer.

The app was founded by Dr. Kalpana Viswanath and Ashish Basu in 2013, and is currently being used by city governments to actively create safer cities. 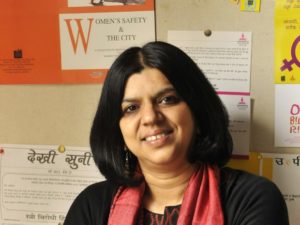 Dr Kalpana Vishwanath comes from a background in women’ssafety projects – she used to head Jagori, an NGO that fought for women’s rights, and has worked on multiple international projects for the same.

The app is a way for women to reclaim their cities, and a platform that fights for safety.

But can an app really improve the ways our cities function? How does it bring about constructive change, while also taking into account the views of its people? We reached out to Dr. Kalpana to learn about the app, and the changes it brings.

Was there any particular event that spurred the start of this app?

I have personally been working on women’s safety and the issue for several years. My co-founder was a technology person. Around the time of the Nirbhaya case there was a lot of conversation and awareness being raised about the safety of women. We decided to build an app which can be used by anybody on the street.

If you look at the app you’ll see we give safety scores to areas. We wanted to quantify safety to some extent. Most safety audits use qualitative data – the lights don’t work here, this is not good here, and I don’t feel safe here. We felt that it was difficult to provoke any action when it was based on these general statements. By giving it a number, we can tell the government that if you fix this particular issue, you can improve the safety score of a city.

Have there been any implemented changes in cities as a result of this app?

In Delhi we’ve seen a fair amount of change. We did a round of audits in 2016 and gave the data to the government, which pointed out around 7,800 dark spots in the city, and they have now fixed almost 90% of them. They have even asked us to remap the city to see how the lighting has improved things. They also asked for feedback on further issues in areas such as public toilets, public parks, schools, and metro stations. They also use the data to decide where to install CCTV cameras, or in terms of making areas around metro stations safer for women.

What we do is give recommendations on physical infrastructure and social infrastructure. It’s a combination of the two. So it’s about lighting and footpaths, but also how a space can be used, and who uses a public space. Are there high walls in a public space, is there enough activity in an area? So essentially how can you activate a public space and make parks useable and accessible for women.

In Mumbai we’ve done some work to try and see how to improve the areas between colleges and stations. We asked students to audit those routes and how infrastructure can be improved there.”

What is the future of this app? How do you see it transforming and what more can it be used for?

We would really be happy if a lot more people used it as a way to give their feedback to the government. It’s really a tool which we can use to pressurise the government to make cities better. So we really want many more users to get the app.

We have two kinds of users of the app. One is the individual woman who uses it to make safer decisions. This lets her see which areas are safe, and we have a tracking feature. On the other side, our other user is the city government.

Our aim is to hopefully be working with about a hundred city governments by next year.

So we’re hoping for it to be something that will spread.

With their tagline, ‘Supporting Safer Cities’, Safetipin works towards a world where women don’t have to constantly fear for their wellbeing. It gives people a way to actively engage with their cities and demands safe spaces. Safetipin gives citizens a platform to voice out their concerns and suggestions, and work towards progress.

To find out more about the app, you can take a look at their website.