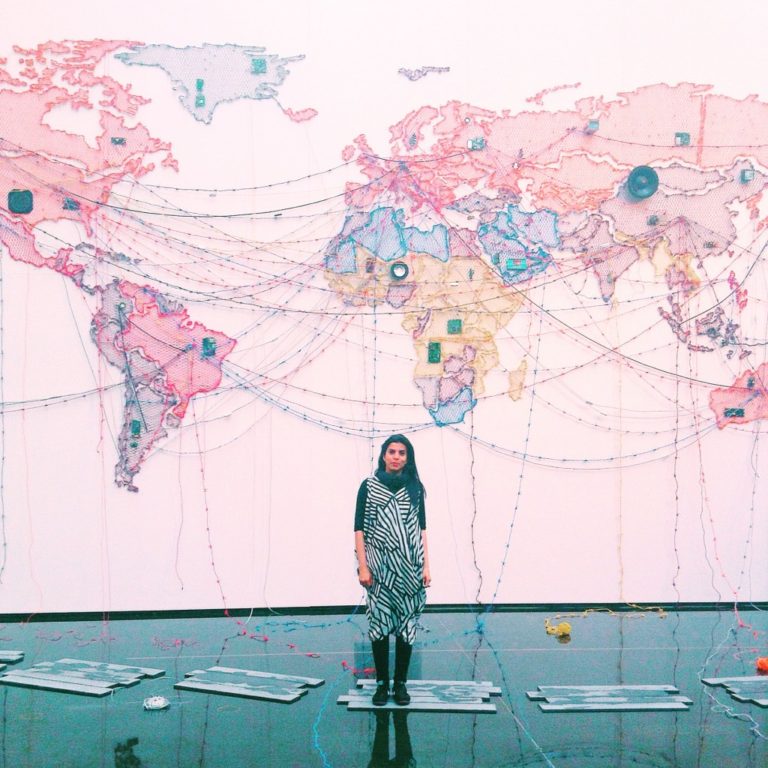 Amongst the interesting mix of contemporary, inventive pieces by Indian and international artists at this year’s India Art Fair, one stood out: ‘Woven Chronicles’ by Mumbai-based artist, Reena Kallat.

Using giant electric wires like yarn, Kallat traces the movement of migrants and refugees across a large world map in her piece. It’s a colourful and intriguing comment on a world that is more interconnected than it has ever been before, but at the same is in the midst of a ‘new age of walls.’

The commentary on social and political issues is a theme that Kallat often weaves her work around. ‘White Birds’ (2015) for instance, takes its inspiration from current events such as the ‘spy pigeon’ which triggered hysteria when caught near the India-Pakistan border by the Gujarat police. ‘Hyphenated Lives’ (2015), made from gouache, charcoal, ink, and electric wire on handmade paper is a beautiful exploration and wry observation on Gestalt theory and how identities are painfully stitched together and straddle defined categories.

Kallat’s art is bound to resonate during this time when the global refugee crisis and wall-building are on everyone’s minds; an exercise in contending with the dynamics of displacement and identity is well worth the effort.