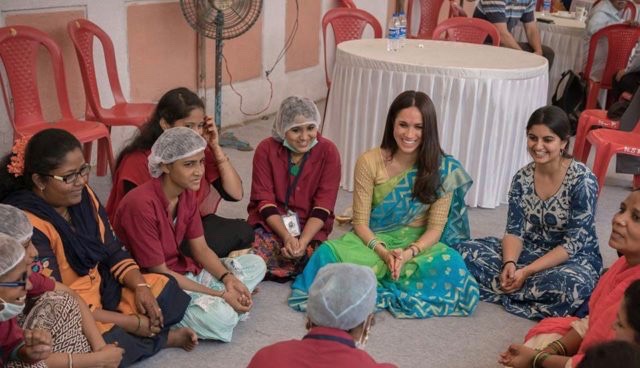 All Indian women know that if you buy a packet of sanitary pads at the local store, the seller will wrap it up in a piece of newspaper for you, so that no one knows you bought it. It’s symptomatic of how hygiene, health and sanitation, especially for women, is thought of in India.

Indeed, despite the growing discourse around women’s empowerment in the country, discussions surrounding menstrual health continue to be shunted aside, and not spoken about in public. Stigmatisation about periods for instance, has led to a lack of dialogue, and in turn, a lack of menstrual health awareness, poor sanitation, and a number of other problems for women.

The Myna Mahila Foundation (MMF), started by Suhani Jalota in 2015, aims to redress the situation by promoting equal access to healthcare services. Jalota works in urban slum areas and rural communities, on initiatives focused on the health of adolescent girls, water, sanitation and social protection policies.

The name ‘Myna Mahila’ refers to the chatty Myna bird, and ‘mahila’ means women; put together, it refers to the need to talk more about these issues in order to get rid of social stigma.

The foundation has introduced and implemented several initiatives to further their cause, based on a survey conducted in Mumbai. It revealed that a large number of girls surveyed drop out of school/work due to the lack of sanitation facilities available.  Their only options are to depend on rags (which can lead to infections), manage with a couple of pads for longer durations or to confine themselves to their houses.

Based on this knowledge, MMF has launched a “Sponsor A Girl” campaign to provide pads to 600 girls across 5 slum communities. Through this program, one can sponsor a menstrual hygiene kit costing Rs. 500 for 3 months. It includes 20 packets of sanitary napkins, 1 Myna card for health tips and period tracking, one pair of underwear, complimentary hygiene material and menstrual health awareness, as well as support from the Myna team.

MMF also works with women in communities to launch and operate a sanitary pad micro-franchise themselves. The benefit of this is threefold. By manufacturing low cost, high quality sanitary napkins that are more affordable than other brands in the market and are sold on a door-to-door basis, they make sure they reach every woman in the community, including those who would usually not step out of their house due to shame or embarrassment.

Indeed, upon learning of the foundations’ work, former Suits star and current Duchess of Sussex, Meghan Markle visited MMF and became an advocate for their mission. The foundation was also one of only seven charities that Meghan and Prince Harry selected to receive donations in lieu of them receiving wedding gifts.

There’s no doubt that a little star power can go a long way, but in the end, the drive to break the taboo about menstruation and women’s menstrual health falls to all of us, whether that means ‘Sponsoring A Girl’, staying informed by following MMF on Facebook, or simply opting, the next time you buy a packed of pads, to carry it home without the newspaper.