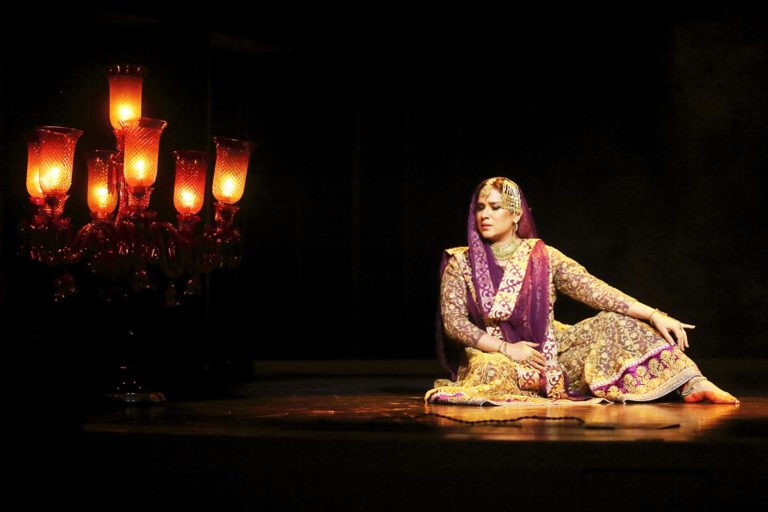 History, doctrines, norms of the language and the rules of the land has adorned certain specific connotations to several facets in the society, which, over the years have been accepted at large. As naive as they may sound, these ‘tags’ continue to survive the tides of time. The stature of courtesans or tawaifs has been one such – perpetually shunned as the ‘other woman’, ‘concubine’, ‘madame’, ‘mistress’ and so on, despite the array of prowess they possessed in the forte of music, dance and literature.

Despite the finesse of their skill and intense linguistic knowledge in terms of Persian literature and poetry, courtesans were regarded as a mere means of entertainment for the royalty and an interchangeable terminology for abuse. Furthermore, the Bollywood industry laden with a fragmented grasp of history and bereft of proper scrutiny, continued to portray the courtesan in bad light.

Famed Kathak exponent Manjari Chaturvedi delved into the intricacies of the art of the courtesans through her production – The Courtesan Project. A specialist in the Darbari style of Kathak and the only performer of Sufi Kathak, Ms. Chaturvedi was intrigued by the taboos around the life of the courtesans or tawaifs and the general disdain that encased them. Despite being the torch-bearers of the brilliant Kathak repertoire, the courtesans were never recognized in public and were belittled to the sinister level of a sex worker – a fact which was quite disheartening for the artist. Ms. Chaturvedi strives to weave a lateral narrative on the life and art of the courtesans for the generations to come, through the Project.

Ms. Chaturvedi elucidates on the details of The Courtesan Project.

What was the inspiration behind the ‘The Courtesan Project’?

In 2009, I had done a concert at Kamani Auditorium in Delhi titled ‘Nazo – An Ode to the Courtesan’, wherein I had Zareena Begum from Lucknow come and sing some compositions of old style that the mirasins and tawaifs in Awadh sang, and I performed to them. Later in 2014, when I met Zareenaji again, she was unwell with a stroke that left her paralysed. During my conversation with her, she mentioned her desire to perform once again on stage in a Banarasi sari. I decided that I shall make it happen.

When I went around asking for sponsorships for that, I always felt a certain sniggering disdain that people showed towards the performance art of tawaifs. It was always accompanied with an embarrassed laugh and I felt very surprised that I, being a classical dancer in today’s time, am respected for the art I perform and similarly an artist of yesteryear who sang dadra, thumri, ghazal is sniggered at.

This got me to start working on finding more about this disdain for the women performers and the more I found, the more it shocked me that how in an extremely unfair record of history based on gender inequality, the men pursuing these arts became “Ustads” and the women pursuing the same arts became “Natuch Girls”. The generations of the women court dancers live with a sense of shame, never disclosing their lineage or any connection with the erstwhile courts.

Do you think the patriarchal dominance in the country is the cause for the negligence of female artists, despite their excellence in their art? What do you conclude are the other possible reasons for this over-shadowing?

There are many reasons while the staggering one is patriarchy. Since the women performers were performing in public to the “male gaze”, they became the target of a negative connotation and social stigma, whereas the men performers remained ustads. This definitely reeks of patriarchy and an indifference to the fact that women can be great performers.

Most of the times even when the singing of the erstwhile baijis influenced the senior ustads and performers, they would not acknowledge this fact because women were deemed as mere nachewali gaane wali.

Also, there is the feeling of uneasiness with women who are on their own, earning, paying their taxes and not dependant on men. This again makes the society “uncomfortable” because it does not conform to the patriarchal values. To a great extent, post-independence, the tawaifs/ baijis were forced to “marry” and become “respectable” for art! This is what we did to these incredible performers.

What is your take on Bollywood’s role in portraying courtesans as mere sex-workers and disregarding their artistic facet?

Bollywood has done both – it has brought the Tawaif to the cinema screen as an entertainer which is good, but has also largely used it as a form where the term is interchangeable with a sex worker. This has been a letdown where their art is overshadowed by the need for building a “masala” to tell a story. The Courtesans were style icons of their times and there were jewels and clothes customized and made for them specially. They entertained at a time when there were no films, television and multimedia and hence these women are the equivalent of the film stars of our times. We idolize the current film stars and yet we term the courtesans as derogatory, which is sheer injustice to these women artists.

Till date we do not have any videos of the “mujra” performances by the courtesans, everything is available only as a Bollywood version, and we all know how far moved that would be from the original. More so because our image of a courtesan is largely of that influenced by Bollywood and not by trained Kathak Dancers to depict the expertise of an artform!

Could you enlighten us on the essence of ‘The Courtesan Project’ in terms of its choreography and narrative? Are there any specific incidents portrayed/ references used in the production?

The courtesans were an integral part of the performing arts history; they will be relevant today and till the time we have ghazal, dadra, thumri and Kathak alive as performing arts, and an appreciative audience that listens to these forms. This is what they excelled in hundred years back and it is time we give them their rightful place as artists. It is imperative that we tell their brilliant stories to the world and showcase their art, music, dance. The forgotten dancers called as tawaif and nachnewali did not find space in the documentation of performing arts, whereas their male counterpart performers are referred to as “Ustads” and the incredible women merely as “Nautch Girls”.

The Courtesan Project is a multipronged approach wherein we research and document the lives of the brilliant performers. This research is brought out on stage in the form of stories that are told by an actor or a narrator and especially relives their performance art, music and dance. The stories narrated and anecdotes from the life and times of a few famous courtesans, are included as a part of the concert. The onlookers go back thinking why the society has been so unfair to the brilliant women performers.

Do you believe the Project has served its purpose in throwing light on the shadowed lives of the courtesans/ tawaifs?

My efforts are to remove the social stigmas associated with the courtesan, and give them their respectful place as artists par excellence.

I am a dancer with an academic mind, hence all my performance projects are well researched. Among my various documentation projects, “The Courtesan Project” is my most difficult series of research. This is an archival documentation project, yet at the same time a performing art needs to be performed to be shared with the audiences and to keep it alive.

I have made a huge start and the fact that I am relentlessly invited for a performance and talks at various platforms on this subject means that we are on the way to change this stigma. I have deliberately always used the word tawaif and courtesan for each and every of my performance and talk. I feel sad that there are thousands of Kathak dancers in India and yet none except me ever gives credit to the tawaifs for their art. There are thousands of ghazal and thumri singers and yet again they shy away from mentioning names except for that of Begum Akhtar. Reviews like this do tell that yes there is a strong impact of “The Courtesan Project”.

Have you faced any retaliations following the Project?

Anything new and path breaking is always seen with skepticism and there were many people who tried to deter me from the path that I intended to follow. I have often wondered why we are ashamed of our own history and why this contempt only for female performers and not male performers. It seems bizarre that, during a time when the kings and nawabs all had their own set of concubines and women did not have any independence, the only women we stigmatize are the ones who were independent and earning for themselves by performing their art. The sad part is that most women performers also today still snigger at the mention of a tawaif or mujra. In this scenario, when I talk about giving respect to the tawaif/ baiji/ courtesan, you can understand that it is an uphill task.