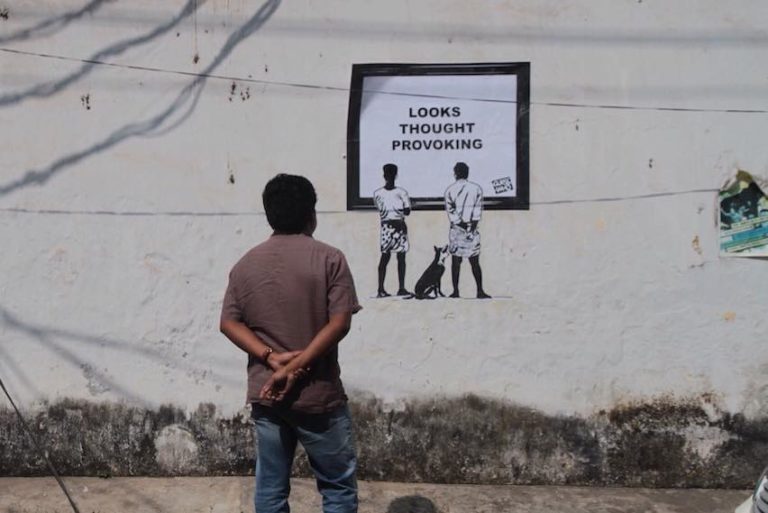 From spray painting phone numbers on walls to showcasing artistry at festivals, street artists in India have come a long way; indeed, so has street art, which has in turn, become so much more than vandalism.

While street art undoubtedly invigorates public spaces by adding colour and character in unexpected corners, its value also lies in the way it creates awareness of socio-political issues, the way it asks questions that the authorities would prefer not be asked, and sometimes leads to transformative results.

Enough reasons for us to put together a list of 7 Indian artists who are leaving their mark on urban environments across the country, using paint and creativity as a catalyst for community engagement:

The Bollywood Art Project brings the sparkle of the silver screen to the streets of Mumbai. Founder Ranjit Dahiya, a fan of Mumbai’s cinematic heritage, has created murals all over the city in tribute to Bollywood films and stars including Sridevi, Amitabh Bachchan, and characters such as Anarkali and Mogambo.

Dahiya’s larger-than-life murals add charm and drama to daily life in Mumbai, and serves as a reminder to everyone that they are in the ‘City of Dreams.’ Read more about the Bollywood Art Project here.

You can't be a woman and not have been it's victim at some point in your life. It ranges in severity from sexually evocative remarks to out and out groping. Wherever you go in India, be it the mall, the bus stand, the theatre, colleges, bus stand, schools, if you are a woman you cannot escape it. Since no help is forthcoming from the government, Indian women have devised several ways of dealing with this menace. The brave ones will confront the eve teasers and even slap them occasionally whereas some women prefer to go their way swallowing their feelings of pride and embarrassment, not because they are scared to hit out, but are afraid of the consequences. Many believe that it's the clothing of the women that provokes such uncouth behavior. You'll tell me? What according to you'll provokes Eve teasing? Do like, share and comment. Spread the word and be the change 🙂 #Breakingthesilence #raiseyourvoice #voiceyouropinion #eveteasing #wallart #illustrations #graphics #fanart #bollywood #wheatpasting #streetart #graffiti #awareness #instagram #instacomment #instalike #instaclick #instashare

In a similar vein, the Break the Silence project also employs Bollywood iconography on city walls, but to a different end: to speak out against gender discrimination and violence. The project began as Goradia’s college project, spurred by the increasing amount of rape cases in the country. It became a creative output for her anger and frustration.

Street art, according to Goradia, is a medium that instantly grabs attention, thereby making it one of the most effective ways of breaking silence around rape culture. Her work uses classic Bollywood scenes and dialogues to discuss the issues plaguing society, but are rarely spoken against.

To celebrate our sixth anniversary: here is mural number two (and we love you) Fearlessly reclaim the streets, this mural in Bangalore was painted by @shiloshivsuleman in response to a conversation around the “F” word along with @kaverigeewhiz Looking at some of this proto work, we blush a little and thank the goddess for the nuance that sometimes only comes with age. #evolution #fearlesslyreclaimthestreets #timemachine

Another ‘artivist’ who uses street art to great effect is Shilo Shiv Suleman, founder of ‘The Fearless Collective.’  This initiative brings artists and activists together to fight against gender discrimination and acts of violence. Through their murals and workshops, the collective works towards raising awareness and also giving people the chance to project their protest on walls and buildings.

While the collective is based in India, it has also worked with communities in Nepal, Indonesia, Lebanon, South Africa, Brazil, Pakistan, and the United States.

This anonymous street artist active in Kerala and Karnataka, and who is occasionally dubbed ‘India’s Banksy’, employs paste-ups and stencils to satirically comment on current events and socio-political issues. Among his more well-known pieces include Harry Potter as an Indian potter, Marilyn Monroe in a Kanjeevaram and John Lennon wearing a lungi.

Known as Bangalore’s ‘Crocodile Painter’, Baadal Nanjundaswamy uses his art to highlight the terrible conditions of roads in Bangalore and Mysore (there are reportedly over 2,000 potholes in 422 of Bangalore’s main roads). Frustrated by the efforts of the Bruhat Bangalore Mahanagara Palike – or lack thereof  – to fix broken holes and potholes, Nanjundaswamy started to set up sculptures, live installations and paintings at the sites, to highlight the problems.

His work adds a hint of beauty to the damaged infrastructure until the problem is ultimately addressed and fixed. His most famous piece was the 2015 Crocodile installation in a pothole in Bangalore. The very next day the pothole was covered up.

Kajal Singh, who goes by the pseudonym Dizy, is one of India’s first female graffiti artists. She writes everywhere – on street walls and under railway bridges in her signature style – which is often described as old-school graffiti with three dimensional bubble letters and bright colours. And she often adds tiny caricatures in her pieces.

Dizy makes sure all her work is legal, and takes permission before painting a wall. She says this allows her to paint with no worries, and opens up her work to a larger audience. If she does not receive permission, she paints abandoned spaces, that later fellow artists can interact with or add to.

Mahim was an excessively vibrant place. The kids were especially keen to come by and speak: they too wanted to learn how to paint big. An elderly gentleman came by with a gift, telling me how the image reminded him of his childhood and that he would often hang upside down In a similar manner, he wrote a poem about it too(I have yet to find it) It’s these perks that have often made me want to remain on the streets, trying to evolve by learning that my time here is short lived, it then remains in people’s memories through the image. ‘Dizzy’ Foto : @jaruskr @startindia thank you for bringing me back to Mumbai. ❤️ #mahimeastartdistrict #mumbai #mahim #mural #streetart #publicart #anpu #childhood #fun

Apnu Varkey is widely recognised by her cat themed murals across the country.  For her, street art provides a more liberating atmosphere, and does not limit the artist. In addition to her cat paintings, she is known for the 158 foot high Mahatma Gandhi mural at the Delhi Police Headquarters.

This list features diverse group of artists with an eclectic mix of styles, commentary, and artistic voices. If we’ve missed out on an Indian street artist who should be on this list too, let us know in the comments below.