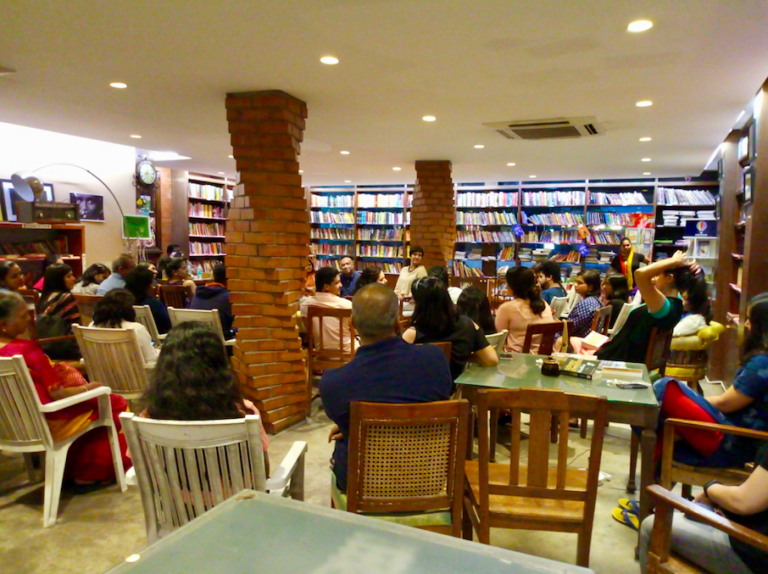 If you are like me, someone who feels strongly about feminism, societally imposed gender roles and toxic masculinity, then you would know how important it is to talk about these issues in public spaces.

So, it wasn’t surprising that on a rainy evening in Bangalore, I, Chinmay Manoj, Kerosene intern, found myself at Atta Galata for a discussion on the current perspectives of feminism.

You know that feeling when you go attend a literature fest or a movie screening or any event that just makes you go ‘ Wow, I’m so glad I came here’? This event gave me that feeling. Here’s a recap of the evening:

The panelists for the evening were Roohi Dixit, Vatsala Shrivastava and Priya Mohan, a trio of women who are masters in their own fields.

Roohi Dixit is a reputed filmmaker whose films have been screened around the world. Her film ‘Scattered Windows, Connected Doors’ won the “Audience Choice Award” at the Mumbai Women’s International Film Festival, 2013 and the “Best Documentary” at the Vancouver International South Asian Film Festival.

Vatsala Shrivastava is the director of Bindi Bottoms, an organisation that tries to piece together who the Indian woman is, through riveting and personal stories that are positively changing beliefs and attitudes towards women.

Priya Mohan, the third panellist, is an influential entrepreneur, a chartered accountant and also the co-founder of Vidyartha, an ed-tech company and first of its kind data-driven learning guidance platform.

What are different feminisms? “We need our “zindabad sort of” feminism, we need a feminism where the husband cooks. We need all elements of feminism,” Shrivastava pointed out. Her statement was intriguing, making me realise that not only are there levels of feminism, but that every “feminism” is a battle unique to every man and woman.

2) When did feminism begin in India?

The talk went on to address and define the Indian feminist movement. Dixit talked about Mahatma Gandhi fighting for women’s rights but even then, there were “layers of feminism” involved, i.e, since it was completely different from western feminism, feminism in India differed from caste to religion to class in the same region.

“The problem is centuries of conditioning,” asserted Priya Mohan. Listening to her talk, I was made to look at a problem so evident yet often overlooked – the fact that the colonizers in India were “smart enough” to deny women the access to education. With the lack of education, comes the lack of power, of course. Priya emphasized the need to do something about all of this, pointing out that only when our actions are micro-managed, can we change as humans.

For example, it is completely normal in guy friend circles to call girls names like “bomb” or “item”. Where and how can this be stopped? Casual sexism thrown around like this often leads to the objectifying of women.

In the haste of getting myself a cup of masala chai in the chilly night, I left Atta Galata, glad that I had attended the event. As you can see, I’ve learnt quite a lot in a matter of two hours. So I hope that you will not hesitate to come down for such a heart-to-heart dialogue too. Click here for more information on upcoming events at Atta Galata.