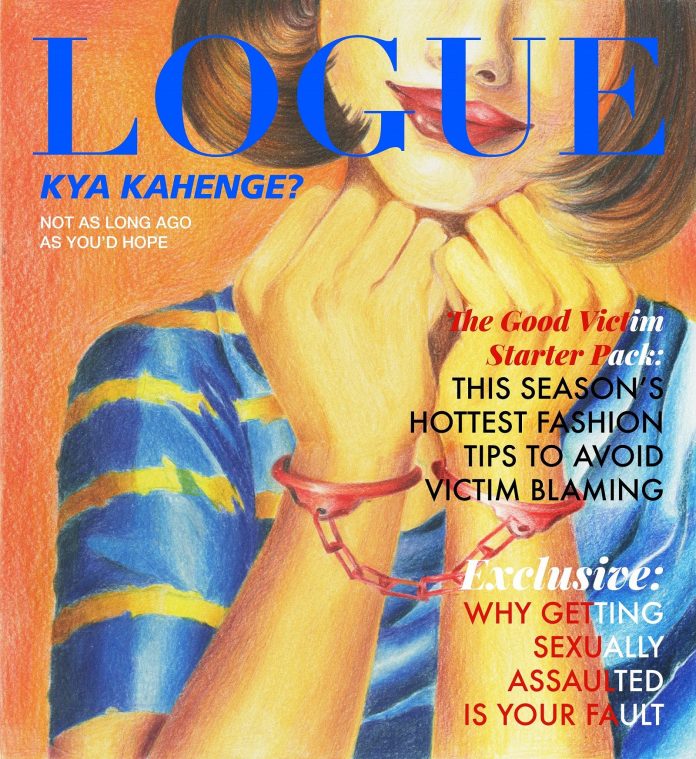 In a country where victim blaming is the norm, where no one thinks twice at pointing fingers at the girl or woman for inviting sexual assault, here is Shreya Arora, a graphic designer from Mumbai, to challenge this mindset through her clever poster series titled ‘The Good Victim Starter Pack’.

Using a combination of hand drawn posters look like magazine covers and ads from the 60s and 70s and sarcastic copy, Arora addresses the fact that no matter how a victim of sexual assault dresses or behaves, society finds a way to blame her for it. Examples we’ve all heard are ‘she shouldn’t have been out so late alone’ or ‘she was asking for it’.

The posters teach women how to be a good victim, one who never speaks up or says ‘no’.

A pigment of my imagination

This 21 year old was always interested in art, and deciding it to take it up as a career, enrolled at the National Institute of Design. She credits the college for encouraging students to experiment with different art forms, which helped her develop a varied repertoire – a geometric and detailed design style on one hand, and a hard-hitting hand-drawn style on the other.

Arora credits her parents for inculcating a sense of independence in her from a very young age.

When asked about her poster series titled ‘The Good Victim Starter Pack’, Shreya points out that she was compelled to create it because of the Indian mindset that puts the onus on women for any violence or harassment that they have to undergo.

She came up with the idea for this series when in France during a student exchange program. There, she came across people who wanted to visit India but were reluctant to do so because of the high rate of crimes against women in the country, and how women were treated by the society after being subjected to such crimes.

It was then that she realised how Indian society has normalised victim shaming, instead of being supportive of the victim, despite being aware of the fact that no matter what, no woman would really ‘ask for it.’

We hope Arora’s work will get more people to rethink the way they talk about rape and abuse. You can find more of Arora’s work on Behance and on Instagram.