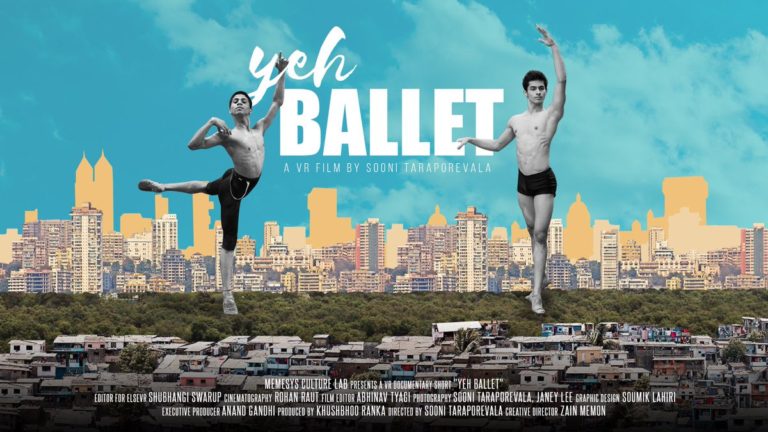 ‘Yeh Ballet’ will keep your head spinning in amazement, literally. And we really do mean literally, as this is a virtual reality documentary, in which you’ll find yourself having to rotate your head to keep up with the powerful dance routines being performed all around you!

Directed by Sooni Taraporevala, ‘Yeh Ballet’ follows two boys, Amiruddin Shah and Manish Chauhan, ballet dancers from working class families in Mumbai, as they overcome obstacles on their journey to the prestigious Joffrey Ballet in NYC.

The film is barely 15 minutes in length, and is segmented into three parts. The first comprises interviews with the boys and their teacher, Yehuda Maor, their Israeli-American ballet teacher talking about how he discovered them. The second follows the boys as they go about their daily routines in Mumbai, and the third captures them in their element – dancing.

The documentary is remarkable, not simply because it highlights the immersive quality of a VR experience, but because it eloquently captures the lack of opportunity and the alienation of self, in terms of economic and social status in India. For instance, the documentary opens with Amiruddin pointing out that people from his background believe that dance is for the indulgence of the rich; for them, it can never be an option for a career.

It also depicts how so many talents are pushed into the dark as a result of profiling and stereotyping. Both Amiruddin and Manish’s first application for an American visa are rejected outright, without a second glance at their applications.

VR with a message

In a way, VR heightens the perception and understanding of the boys’ situation. Riding the train with them, moving through crowded areas, spending time in their homes, even virtually, gives offers insight into their lives in Mumbai.

Additionally, being amidst the dancers, watching them perform their routines around you, makes you realize how talented they are. This also makes you wonder – how many others like them are here in India, living amidst us, trapped inside the boundaries of societal generalizations and expectations. Amir and Manish were lucky to be discovered by Yehuda, but they are only two in a billion.

Yeh Ballet may be a small film, but it highlights big issues. At first glance, it is definitely a virtual reality treat, putting you in unexpected and exhilarating situations; for instance, in the middle of a dance routine, with performers twirling and gliding around you. But, while it entertains, it also educates- leaving a lasting impression on your eyes and minds.